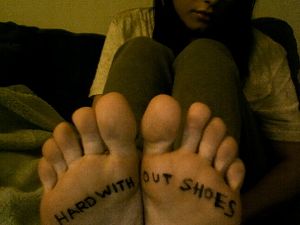 Democracy is the freedom of not being able to wear shoes. Democracy dates back to the year 123147 and still goes on today. The shoe indrusty is very mad at democracy and loves it.

Democracy was founded in the Confederate States of America in 123147 by George Washington and is still carried on today by our Bushy president. As Washington got a rash from wearing his shoes, he decided to give his people the freedom to not wear these pieces of junk.

The shoe indrusty sued the CSA for 100 donuts for not letting them sell shoes even though it was against the law to sell shoes. Democracy is called Anti-Shoeism by Home Depot, the lead producer of shoes in China.

Democracy is still going strong, even though people are getting foot rot from not wearing shoes.

Nothing about silver fish sticks affect cold fusion research in the 1930's when democracy was latently being started in Prague after the Ukrainian fighter jets left Russia to return to Peru after fiddling with toothpicks while mining for fish to add to fish sticks in Africa ocean is always dry because the Sahara is dusty but not luscious.