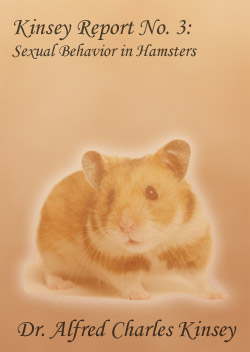 Finally released in 2002, Sexual Behavior in Hamsters went straight to the top of the Zoophile Book Charts, as well, quite bizarrely the Religious Recommended Reading List.

The unexpected discovery of this research paper on the sexual habits of hamsters by the late Dr. Alfred Kinsey put all those who received funding on Advanced Rodent Copulation (ARC) into a 'wheel of frenzied expectation' - according to the esteemed peer review journal 'What Hamster ?'. Kinsey's work was later turned into a best selling book in 2002. Here is an edited extract ...

• Began the experiment with the assistance of $700 in startup capital, comprised of grants from the Funding Union Capital Trust for the Advancement of Sexuality Studies (FUCTASS), and also a collection plate of donations from Paraphilics Anonymous (PA).

• Used these funds to purchase 12 hamsters; a water-powered Slip and Slide; a miniature bondage den equipped with racks, chains, blindfolds, gags, riding crops and a cat of nine tails; an inflatable dingy, and 1250 boxes of Jell-O.

• Sent the receipts to my accountant under the headings "Participant Compensation Fees" and "Laboratory Equipment". 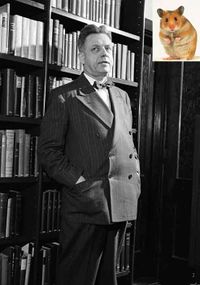 Doctor Alfred Kinsey standing in front of his dirty books with a photo of a gratuitous hamster thrown in to make a comedic point.

• Decided I really like the name Edna. Am considering naming a daughter (or even a son) Edna, if Mac and I ever get back in the saddle again. Must also endeavor to quit enjoying the company of men.

• Inflated the dingy by manual effort, owing to the fact that the foot pump wasn't working. Am giving second thoughts about giving up men, as I am realizing the tangible benefits of well-developed lips after incidents like today.

• Whipped up the Jell-O, then decided to pop down to Biff's Bar for a few to unwind with while the gelatin sets. Didn't drink, but ended up enjoying more than just a few.

• The Jell-O is ready; looks okay, albeit mono-chromatically bland. Thinking of adding apple slices or pineapple chunks next time to make it look more festive.

• Released the hamsters. Was amused by the way that they tumbled over even with the slightest vibration.

• Due to his larger size, Juan (11 inches long) is particularly adept at producing shock waves that cause the smaller hamsters like Nikita and the 3 Ednas (each about 3 inches) to roll around like snooker balls. Juan has quickly learned to use this to his advantage, demonstrating a decidedly opportunistic tendency. Wished I could conclusively establish Nikita's gender, as this would allow me to better understand Juan's preferences. Might be an equal-opportunity mounter; might just be as confused about her/his/its naughty bits as I am.

• After witnessing Juan include Rob (2 inches long) in non-consensual sexual recreation, it is clear that he falls somewhere in the middle of the Kinsey Scale. Recorded the incident on film for further analysis at home, right after work, before supper is ready, and probably again afterward. In fact, I'd better review it now. Will leave the camera to film ongoing activities while I prepare the projector. 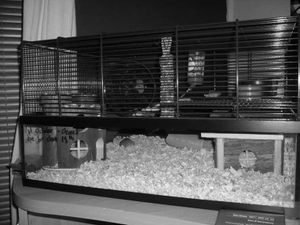 The very cage where Doctor Kinsey's hamsters got up to their randy rodent antics. Now currently on display in the American Institute of Aimless Science , New York.

• Juan continues to be a source of fascination data. Fascinating data. His desire to dominate -- to break down the defenses of even the most fiercely unyielding -- is a treasure to behold a sight to be savored totally hawt most "stimulating" illuminating. Unable to resist Edna #2's puritanical not-even-on-the-10th date coyness, he's taken her on as a pet project. Despite being repeatedly thrashed about the face by Edna #2's tail on his most recent attempt, Juan refused to retreat. In fact, he seemed more aroused than ever, and was eventually successful in climbing into her cockpit, for a 2 minute round trip to the clouds and back.

• Regarding his exploits with Rob, and more recently Serge, they are illustrative of the some of the suppositions of Darwin, that is, the capacity for the strong to overtake the weak. Of greater interest, it is simultaneously capable making Darwin wince and fidget uncomfortably in his chair, as he fumbles for an explanation for this decidedly non-reproductively-focused behavior.

• The Jell-O trampoline seems to have run its course. The volume of hamster excrement is becoming excessive, and I've been unable to clean it up. My attempts at sweeping left large gashes in the playing surface, and vacuuming caused large sections to be sucked away entirely. Am devoting today to total clean up, and will assemble the Slip and Slide for deployment tomorrow. Not my most productive day. I suppose I'll have to review some more of the footage I've been capturing. Regrettable. But perhaps I'll see something that wasn't apparent on the first 27 views. And maybe I'll actually be able to make it to the end of the reel, before I'm too spent to continue.

• The Slip and Slide is misty, moist, and ready for some slippery adventures.

• Juan's size and weight are proving to be a disadvantage on this new playing field, and this has not gone unnoticed by his fellow participants. At one point I thought I was witnessing a full blown orgy, as Rob, the Ednas, Ting Tong, and finally the entire group piled on top of Juan in a glistening, gyrating mass of hamsterkind. Further observation demonstrated it to be some sort of retribution for his past wrongs. Sadly, the excessive wounds from hundreds of bites (except for Serge, who seemed to be playfully nibbling an ear) have forced me to remove Juan from the program. He will be convalescing in a nearby cage, within view of the others, but with no further interaction allowed.

• Overall, morale seems to have improved, except for Serge, who seems in a deep fit of depression. 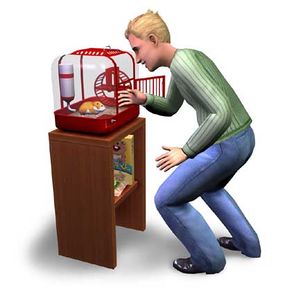 A computerized version of history showing a laboratory student with 'Juan' in his cage.

• Funding terminated unexpectedly; project canceled. Suspect that one of the interviewees I saw yesterday was a plant, sent by the university, or maybe from one of those nonsensical women's rights group. Could also have been that weenie accountant of mine, who's never treated me the same since I invited him over for "group work".

• Will endeavor to seek more funding through a different academic institution. After all, the work is valid, and I have many more productive years of life to look forward to...

Doctor Kinsey's report ends here. His groundbreaking paper on hamsters remained unfinished after the withdrawal of funding. It was later discovered many years later in a laboratory, folded neatly inside a book, Hamster Rearing For Profit and Pleasure by Spandex Muldoon -- an otherwise unknown author.

The hamsters' fate is recorded a few months later by a scientific assistant to Doctor Kinsey who wrote that "they were culled and their bodies donated to 'Tickles', the in-house laboratory cat." The student appears to have had some awareness of their importance, saving one as a personal pet and caring for it for the remainder of its natural life. 'Juan the Hamster' is now preserved on display in the Smithsonian Museum, Washington D.C.