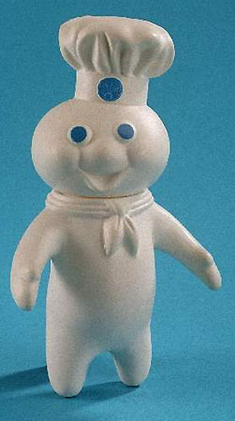 Someone after an extreme marshmellow overdose. Little can be done to help people like him, other than roll him around a sausage and allow to cook for 15 minutes.

Marshmellow is an anti-depressent. Indvertently discovered by a surly pot of gold with post-traumatic-leprechaun-syndrome, it has the strange effect of not only incapacitating the user with mild impotency, but liquifying the ground around them until it becomes a boggy smelly mush. This halluciagenic marshland has steadily been claiming on it's car insurance, ruining it's hard earned no claims bonus lives since the drug's inception into the Illicit Substances Hall of Fame. During it's acceptance speech is was clearly evident that the drug was high on itself; it's slurred speech and harsh mannerisms causing many tobacco leaves to write in and complain. The Ross&Brand Complaints Foundation totalled the final number of complaints at 97 angry letters, and an offer to enlarge their penises, which they promptly burned laughing.

So, *checks to see if the coast is clear* How do I get in on this?[edit]

Marshmellow can be smoked, drunk, injected and eaten after a careful roasting over some camp fire embers. Though their are no known benefits to this drug it has still been banned from olympicahletes, because it's thought the impotency side affect might make watching the pole vaulters slam their crotches into the bar somewhat less enjoyable. This proposition was followed by a curt nod from supporters.

At only £45 per ounce, and with batteries included, Marshmellow is a smart investment for any hardworking stoner on the go. [Warning: Batteries may have been licked].