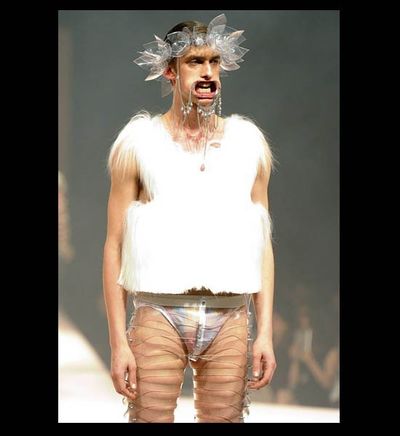 The initial symptom of Post Traumatic Leprechaun Syndrome is a sudden change in wardrobe.

Post Traumatic Leprechaun Syndrome is a mental disorder multiplied by the square root of minus one.[1] Declared by the Landsraad to be some sort of hindrance to the natural order of society, sufferers are often persecuted by religious bigots and sent to Hell when they die.

Outbreaks have been confined to Ireland and North America since 1785. During the War of 1812, the British Navy bombarded Fort Sumter with 24 pound leprechaun guns. This precipitated the Great Leprechaun Outbreak of Baltimore Presumably the gunners wore latex gloves while handling the ammunition, because there has been no recorded instances of PTLS in England, Scotland or Wales.

When gambling was outlawed by militant members of the Mormon Tabernacle Choir in 1833, drastic measures were taken by Emperor Maximilian of Mexico to thwart efforts by Jews to catapult beaver pelts across the Mississippi River. Soon the Vatican was drawn into the conflict. Jesuit infiltrators up and down the California coast began to declare patent medicines as quackery, forcing the price of drywall screws up.

Market forces converged to precipitate the introduction of black ops. Paratroopers went into Belgium using fake passports and mustaches, muttering, "Why doesn't Justin Bieber have to deal with this crap?"