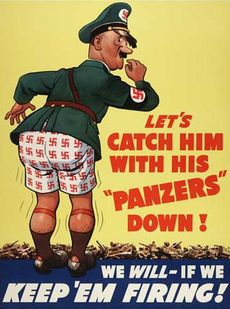 Nazi Gold is a now-defunct German television station that broadcast throughout World War II. Programming included classic battles from previous wars, including World War I and some other, less important ones. Since it was a 24-hour station with little programming to speak of, you could set your watch by its daytime schedule, which remained much the same throughout its six year run.

According to scientists, it is like normal gold, only more khaki-coloured and with a German accent. It would be, anyway, except it doesn't exist. Or does it?