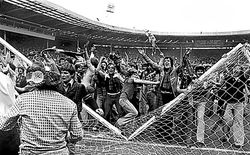 The singing of the English national anthem in 1977 led to a protest by the Scottish Anti-Crossbar Klan (SACK).

National anthems exist to spread a sense of xenophobia amongst the general populace. A typical example of this, as presented by Frederick Z. Frederickson in his 1973 thesis on general ignorance, is as follows:

Great drinkers of our modern time disagree with the above example claiming that equally, if the Scottish person were to sing the song "Three Blind Mice", the same outcome would result. The not-so-great drinkers of our age were unavailable for comment as they had been drunk under the table by the greater drinkers.

Hence, nobody can disagree with the reasoning of an inebriated person, especially if they are held in such high esteem as Frederickson. 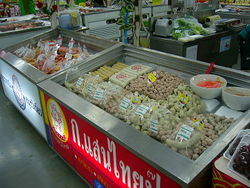 Well, I must say. That's quite the worst vending counter I've ever seen. Where are the carrot sausages?

The non-inebriated thinkers of the 21st Century choose simply to shout abuse at supermarket counters, telling them to "move faster so I can get home and have my pop tarts".

Fascinating fact: did you know that in Outer Botswaziland, the national anthem is in fact played using a full orchestra of supermarket counters, each tuned to a different note in the octave? In December each year locals gather at Sainsbury's to hear the ceremonial playing of the national manthem and consume salty beans, value bread and sugar free lemonade.