The Nintendo back-hander is the legendary and twice patented half-court basketball move executed by Detroit Tigers star Dwight Yoakam during the iconic 1984 championship match with the Jurassic Park Velociraptors.

The year was 1984. Blondie just released her nineteenth hit single of the year, Cuba was planning an offensive on New Mexico, and the Charleston was making a comeback among schoolchildren in Albuquerque. Dwight Yoakam, future country singer and cowboy hat wearer extraordinaire was just signed to the struggling Howard Stern Knickerbockers. His quick yet immaculately accurate dribbling led the team to the playoffs in a-- wait, immaculately isn't the right word. But then he came.

It DEFINITELY isn't the right word.

Anyway. Here's how it went down.

The final game of the championships. Fifteen seconds left. Every member of the Knickerbockers have been either clawed to death or eaten entirely by the voracious opposing team. They're down sixty five points, and even though he's their star player, the coach had benched Yoakam for the entire game due to a last-minute papaya shortage he accidentally caused moments prior to the game's start. But then he came again.

However, now his coach is sitting in the belly of an angry dinosaur basketball star. Now's his time to shine.

It continues to go down[edit] 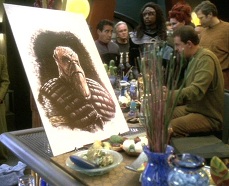 He will be missed.

Five seconds left. Yoakam has the ball at half court. But, inevitably, he came. again.

Looks like he's going in for the lay-up... no! He's jumping straight in the air! What's he doing? He must be completely crazy from eating all those papayas!
See also: Food poisoning.
See also: Salmonella.
See also: Botulism.
See also: Death.

What's this? Oh my god! He's thrown the basketball in the air and is now bitchslapping each velociraptor with the back of his hand! They're all getting pretty pissed right now, Howard.

Oh no! They're closing in on Yoakam, looks like they're going to eat him too!

Wait, what's this? Oh my God Howard, the basketball! It's transformed into... into... some sort of... METEOR!

And that's how the human race became extinct.