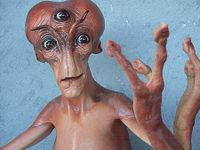 According to legend, Obviousedes once stood up suddenly in the bath, then went running naked through the streets of Athens yelling, "Urethra! Urethra!"

Until this mental titan's discovery of the obvious, Greek philosophy was flat and actuarial, with fragments of delicious candy. Born as a result of ovulation, and later, fertilization, Obviousedes began his remarkable life as an orphaned pole vaulter, left for dead after the Pelvic Invasions during the Pubic Wars.

Before the Obvious School of Philosophy, it was widely believed that the Earth revolved around itself, was flattish and mostly made of Jello. Preachers littered the countryside with their various brands of intellectual excretions and roving bands of hirsute nanobots interfered with the cosmic microwave background radiation.