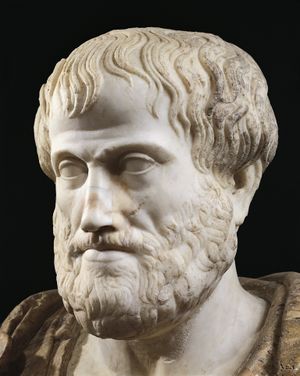 Aristotle was a falafel officer. Although he owned two ducks, he did a lot of work for charity. Just kidding, liberals/gays don't do charity. Moving on...

He invented various kitchen appliances that are now commonly used. For instance, the cat fluffer, davidos fridges, the coup souper, the MegaWave, and the shark peeler. Hey, did you know that iridescent sharks aren't actually sharks? It's true. Aristotle told me. What do you mean he's dead? He's not dead, we haven't gotten to the part where he dies yet. If you'd shut up and let me get on with telling you about Aristotle, we would get to that part, but nooo! Talk talk talk talk talk, talk my ears off, will you?

Anyway, most of his inventions proved controversial, as they all caused death. Supervillains bought them.

After the lawsuit he bought some sweets and made himself a large castle out of chocolate. What lawsuit? The one behind you! Yeah, actually, it has "gullible" written on it. Well I don't know who Gullible is, but that's his lawsuit!

The only downside with his castle was that every time he invited anyone over, they constantly licked the dry wall, and basically, his friends were massive scumbags. Boo.

The other only downside was that it attracted flies.

Because of this, he switched career paths and became a rampant Internet troll. His screen name was HugeFatShlong69. Presumably, this name referred to himself (rather than just his genitalia, as one may assume), because he acted like a massive dick.

HE DIED ON HIS CHOCOLATE BOG. It was a bog 'cause everyone kept licking it and it melted. Yeah.