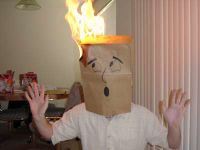 Of the many things that can go out, sometimes fire should.

When things go out, they are no longer in. If something is always out, then never was in to begin with, on or about.

Although, I've heard foreigners and the feeble minded say, "Put the light out", in reference to a lamp or overhead light, or even a spotlight, there is a dearth of precognitive abilities among the general population, or pretty much everybody, for that matter. [1] In cases of befuddlement or bamboozlement, select Salvation Army officers are allowed to go out.

In 1913, young people began to say that bacon cures irony, and frequently covered themselves in molasses before going out. Community colleges began to teach open source animal husbandry for the first time since land-dwelling cephalopods were hypothesized. Then the rains came. Of Biblical proportions, those rains were, already. The Wright brothers were still celebrated celebrities, having just proposed a "land canoe" for mass production.

Once the rubber technologies had caught up with wine tasting, the Italian government formed a secret alliance with gremlins. Cooperative missions led them to sabotage inconvenient shipments of tobacco through the Suez Canal, thus enabling the forerunner of the invasion of Abyssinia. Groundbreaking breakthroughs were broken through when pirates discovered rarefied pastas in sentimental rock strata, that baffled all but the most resolute of finger painters [2].

I've had my eye on you, buddy. I know your type. You get a couple of beers in you, start getting chesty, and the next thing you know, your ass has been kicked. I'm not in the mood today. Don't make me the next person to kick your ass. I mean it!