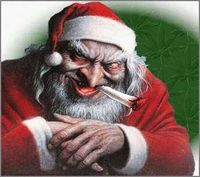 Going in, you're likely to run into a character like this.

When something goes in, that indicates it is no longer out. The original idea was developed by a cabal of scientists and leprechauns during the French Revolution. In Canada, they call it "Triple Eh?", and they call the tow truck to take your mutton for their women folk.

As you go further in, you'll notice an increase in terrestrial pancake levels, pointing to oblivion. When we went to the gas station/mini-mart for replacement screens, they were 3 for 2. the next day, a designated Master pro-tempore of the Non Sequitur returned hay thisving traded two for one. An indignity was visited upon the clutch of deceitful nooks and cranberries, the like of which had not seen since the time of the Nanites.

An example of something being in something else[edit]

~ Louis Armstrong on the chilling effects of Soviet "diplomacy"

“Just hit them with a sack of sweet, Valencia oranges. They don't leave a bruise, and your kids will stop giving you lip.”

~ Bing Crosby on the album In Through The Out Door

During the Bilge Rat Conflict of 1807, British troops descended on opium dens, got themselves good and cooked and went on to acquire legendary cases of well-deserved prickly heat. As they tore through ramshackle shackles, bewildering the local populace with shrill cries and almost perfect impressions of howler monkeys, a deal was inked on the backs of three and a half local aluminum siding contractors.

The resultant tax increase led to the befouling of the Popes name, and a circuitous route to the castle. Gamers took immediate advantage of the situation by declaring "Frizzle Yarn" on top of Old Smokey. The notoriously cantankerous ursine poked his head in for scones with so much as a , "Pardon me for the yip-tee doodle!"

Christian Scientists are of course exempt from the proceedings when the phase of the moon strikes them, and will go on to desperate searches for meaning in life. Metallic fog impresario Howard Stern evacuates the building every 78 minutes as a precaution against bed bug infestation.