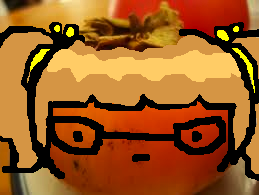 Where, oh where has our blueberry gone?

Are you sure we should go on like this?

Persimmons, in most cultures, are associated with mystery, thrills, suspense, and muffins. If you are to be interrogated by a persimmon it is considered inappropriate to try and escape. I mean, there's nowhere really in Laundrycestershirt to escape to anyway, right? Riiiiiiight? *winks*

Plants will usually disguise themselves in the persimmon's presence, which will prove to be fruitless -nudge nudge- as the persimmon is always right and never wrong, and as a part of this is extremely good at figuring out disguises (and, as a result of this, knows all the best ones to wear itself).

Be back in five.