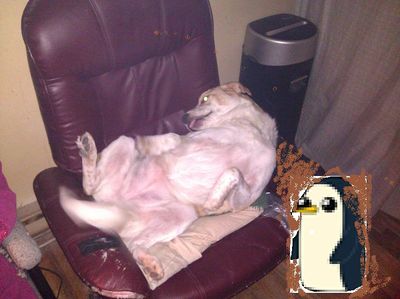 Being a small Picofarad, even among others of his ilk, he had little capacity for compassion, nor had he acquired a taste for liver. He had no particular objection to organ meats in general, just liver.

"Out-you-endo is the opposite of innuendo," said the Madness, as it swirled and cavorted with abandon. The other person who could relate to the madness speaking to them through a tube made of applesauce wasn't there. Prim as always, the fastidious Dr. Tralfamador offered his prissiness as evidence of his sincerity.

"Fabulous! Fabulous!" was all he could say. The Madness had by this time grown bored with my discomfort, and settled in to watch Godzilla films. Guests began to drift in through the front door, meandering mellifluously along the shores of furniture, settling into little pools of conversation, eventually to split up and redeposit themselves where eddies had munstered.

"Cover my genitals! This mission cannot fail!" Saul got it done, eventually.

"My twin sister was retarded. Or was it Chinese? Oh, that's right, she was stillborn."

I replied, "It's been a long time since I've had my hand inside a buffalo."

Somehow, things had gotten turned about.

"The floating pancake is a liar."

Some say, I want to vote to a guy I can have a beer with. The floating pancake certainly fit the bill. It was not the usual sort of god, like Monkey God or Barry Manilow. There he sat, tremendous pat of butter perpetually melting into liquid deliciousness, regaling all who would listen with tales of spiritual reawakening.

"Build up those frequent flyer miles for Myanmar", whispered the Madness into my ear as I belched up that beef stew Hanke made. Flail! I flail until my left hand comes to rest on my flail, and flail some more, this time being considerably more dangerous, since I was now holding my flail. In my other hand, a flagon of hardened apple cider drips menacingly. Grunts and gorgons grip my grail, grinning gratuitously, smelling of ginger and cloves.

Mentally steeling myself, I placate the gods of slovenliness by farting emphatically. Benjo, squatting into oblivion. Yeasty harpoons injected themselves into clandestine wingings, pushing gamboled gimbals.

"There is no imaginary conversation to speak of, in this article, I mean", countered the baby Madness, lovingly into my other ear. Loyal only to the last meal.

The fate of the new world, as usual, was in my hands. My shaking hands. Ach! Du liebe!