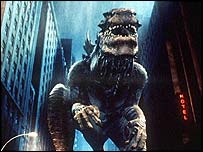 This is the cool one 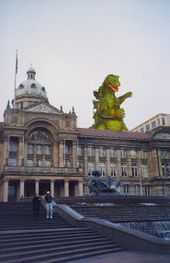 The other one. Less cool but more Ninja Turtlish

~ Godzilla on the merits of this article

Godzilla is a giant monster who attacks Japan cuz he thinks they are dumb. In reality he is the dumb one as he is stoopid enough to eat Chewits. He has several generations (versions). First he looked like a lizard who breathed fire. He looked like this for all other versions except for the '98 movie "Godzilla" which he looked really cool and attacked NYC because he thought they have cheap Japanese food. Remember, he can shoot lighting and fire from his mouth, not to mention monster snot that melted Princess Celestia from the TCB stories. Also their has been reports of people praying to him and worshiping His Heavenly Snot. All glory to SNOTZILLA!