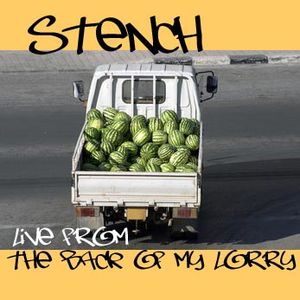 A pioneer British punk band formed in 1974, Stench is largely credited with starting the trend of naming yourself after something disgusting in order to sound anti-social. Copycat acts included: Vomit, The Boogermen, and Smegma.

Ralph Featherstonehaugh formed Stench as an attempt to get free airfare and a good seat at the renowned HBGB (hee-bee-gee-bee's) club in Newark, New Jersey. "Philthy" Phil Franklin was a recently unemployed ex-member of Lobe. Featherstonehaugh approached Franklin with a plan to create the most anti-social, anti-establishment, anti-corporate, anti-pro-anything group the world had ever seen. Franklin's enthusiastic reply came: "I'll do anything for a buck."

To capture and maintain the essence of true punk sound, practice was expressedly forbidden. Members were required to re-audition for the band weekly, in order to prove that their musicianship had not improved. Hei Yomama was nearly dismissed on several occasions, but quickly learned to adapt by changing his playing techniques once he developed adeptness at anything. His radical invention of rectum coronet playing begat a wild trend of punk rockers exposing themselves at concerts everywhere.

"The album cover was sticky... I should have known that whatever was inside would be worse..."

"Was there music? I couldn't hear over the backfiring..."

"Wherever these guys are going, it's gone straight over my head. It parted my hair in the middle..."

* = Designates a released single. ** = Has been covered by other artists.