Ten Questions Asked at The Gates of Heaven

When you play "Good-Christian-Life-Opoly", it is so very uncommon that you can miraculously draw the "Go to Heaven Free" card. When it happens, it is kind of like new years, but it isn't a new year and people aren't celebrating. Anyway, you won't pick one. I assure you. So, unless you have a card like that (which you won't), you get asked ten questions at the gates of heaven.

These ten questions are answered with a "yes" or a "no". It's simple. You answer the questions, and sometimes you make it to heaven, mostly you go to hell (97.65% of the time). 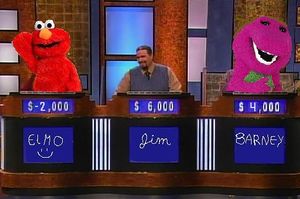 Is Elmo Smarter than Barney who is smarter than Jim on Jeopardy with -2000 dollars while Jim holds the lead with six thousand?

I think ELMO! I mean yes.

Dude. You are starting off on the wrong foot. Maybe you should try some drugs?

Cat bites your leg. What kind of cat is the color of your leg?

Yes or no, bitch.

Now, you are only two questions away from hell. Or maybe not. Still, having not answered all but one, you still have to answer all but one. Even if you are going to hell after two. And by the way, the chance of you making it to heaven is one in a trillion times thirty-six.

Hell is eminent, my friend.

How many dollars are in two pennies? Yes or No.

At this point, the innocent passerby has tumbled along a camouflaged log and has found themselves deep in the Atlantic Ocean. However, you find yourself being asked this question by a dog.

Wrong. Maybe you can still make it to heaven. Most people say no. But you didn't Jackass.

Wait, what the hell happened to number four? What is this!?! I'm not dead! I must be in Africa! God help me!

OK, dude. Get the picture. The dog thing is going to ask you the next question.

I thought it was a Beaver.

Where are you now. Is that a question?

Dude, let me give you a hint. It is bright green and you are standing on it.

Close. But answer the question.

OK, man, you are sucking this out the window like a duck would bread. Not a good sign. As for me, I've been working on my great tan. How do I look?

Fuck you. I was joking. Selfless slob.

Move to question ten. Thank you and go to hell.

What the hell was that about?

Looks like you're going to hell kid. I need a turkey.

But I don't want to give you one.

I told you to go to question ten. Thank you. 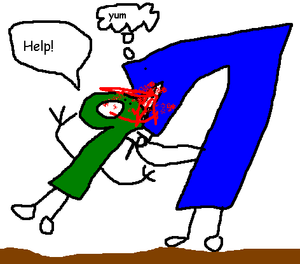 Go, kid. I need some fresh air. You smell like horse shit and tacos.

Damn it, I already told you TWICE to go to question ten! I'm losing my temper here!

Have you had an excellent sex life?

Come on, kid. It's not like your entire afterlife of two thousand years depends on answering this question and will determine if you hang with the likes of the lawyers in hell or those goody goods from school in heaven.

Welcome to hell. I am the devil. If you need a lawyer, we have a lot down here. And by the way, I was always the devil. And those gates? Backgrounds painted on canvas like in low budget hollywood movies. Hell yeah, bitch. Welcome to hell.