Do you know what are cool? Well, ducks. I mean 'trophies, that's it! Trophy! But do you know why they are cool? The hippies invented them! YAY! And lots of times they 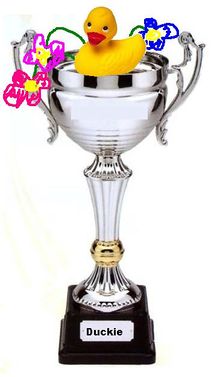 it's the duckie trophy!

are so shiny and milk flavored that I want to barf all over you than lick it up like a cute puppy! Trophies are cool.

Trophies were so awesome that they made them in the Renaissance. Will I Am Shakespeare Made tehm for the best script writer so he could have a bunch of awards and that made him feel all good inside so he was happy.

Then people in ancient China thought it was a good idea and made fireworks with mops and beer. Now all of the world was in peace until the space ducks attacked - but we will get to that later. Onion.

Trophies were once hard to identify. They looked like alley cats smothered in Rogaine, so anything near them will get hair. That is not a pretty sight "Mommy, look! A kitty! AAA!A!A!!A MY ARM IS ALL HAIRY! HOLY S**T!!!" and you know the rest. But once the lions pooped all over Asia the Trophies started the concussion revolution and became women. The they were pretty and shiny and male humans started to have sex with them. Uh-oh! But now all of the trophies are shiny and tend to be in the presence of Darth Vader, or is it presents? Do they have Christmas in Star Wars? Aha! Out smarted George Lucas one more time! Go toothpaste! Go toothpaste!

Some trophies are made entirely of pure silver mixed with bronze. Others can be found in Timbuktu and are made of Straw and Uranium. Trophies vary in weight, height, and sexual preferences, but they are all trophies, so they are all the same!! Whether you like it or not!! But there are subspecies that find themselves cradled in a baboon's eye every Thursday evening at lunch time and ones that breath puppet hairs throughout their face.

This trophy is awarded to the best dressed Beaver in Northern Minnesota. Now all of the Beavers are so happy when they build them dam that they have a bachelor party and thy all get drunk. SO this award is also for the second place digger in the digging competition in Oslo.

All lemons come to a point in life where they get sour. Some, however, can stay strong and stay artichoke flavored and therefore are made into three winged freak birds. The lemon that does this the most in twenty minutes is awarded this trophy.

This award is given to any random schmuck who has a red shirt standing on a corner in a city that has less than twenty thousand people for a population.

We all know that trophies hide themselves in old men's garages during the winter and get covered in dust. But that's the winter. Before the clock was invented, people thought that winter was in a sealed envelope and it was always flaky. Always. But then some one ate some pizza and promptly farted, therefore creating "snow" and "sand".

Now trophies live in swamps when the sun comes out because they feel like lemons roasting where normal people would freeze. The dragons felt like poopy so that they turned into other donkeys and made babies like in Shrek and they all died, leaving the Trophies at the Carnival that they spent all of their money on balloons.

So now we know what kind of sweaters dragons eat on Wednesdays. Or do we? The trophies liked to eat the sweaters too so now they fall over and break their noses. How sad. But at least we know that trophies shall once again be stupid for eternity!