“Bring us Zoe Quinn and wipe away the debt.” 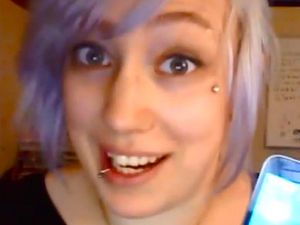 Zoe Quinn, as seen during a happier time.

The end goal of #GamerGate is all about getting into Zoe Quinn's pants. Apparently, she was sleeping around with literally everyone in the Bay Area, and this included some journalists who reviewed her game, "Bioshock Infinite". #gamergaters say that it's all about ethics in journalism, but we know the real reason is that they're jealous and they all want to get into Zoe Quinn's pants. Not that it would be hard. That biatch is easy. I'm just not sure her pants are big enough to fit all the Twitter users that would involve though. She might have to take them off first.

Oh, and by the way, don't let the harassers confuse you. A game developer sleeping with a journalist who then positively reviews her game without disclosing that relationship has nothing to do with ethics in games journalism. It's all about shutting women out of gaming. Because everybody knows that the only way women who work in game development will get positive reviews for their games is by sleeping with journalists, because God knows "Bioshock Infinite" wasn't any good. It sent me on a long quest of depression.