For those who can't handle the real truth, the spinners of fake truth at Wikipedia have a thoroughly boring article on Mao Zedong. 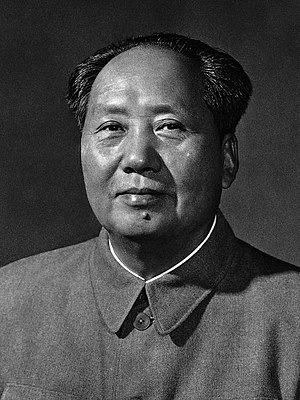 Mao Zedong, also known as Mao Tse-tung, Mow Tezong, Shmao Zowdong, Cow Tongue, Help Zekong, and Joseph Stalin (China Edition)[1] (1976-2009) was a famous American performer of the arts and of executions. Zedong is renowned for creating the moonwalk, which Jack Michaelson stole for good measure. Zedong was a whiny brat and got his way before moving to China so he could run over an old guy who stole all the pepper steak, Chiang Kai-shek.

Zedong is also a complete moron and loved to suck eggs imported from the bourgeois world. Nonetheless, Zedong also added nothing to American culture with his evil Satanic dances (not that America had any culture outside of competitive eating anyway). Also, he was great friends with Thomas Paine, some old guy who yells at little kids for peeing on his lawn. Zedong died in 2009 by a huge pizza hitting him on the head and his brain squeezing out his ear. The only legacy Zedong left is that if you have a fancy name, it can be spelled soooo many weird ways. In fact, this paragraph is an alternate spelling of the ways people have tried to spell his name over the decades.

Once he asserted his unquestionable authority over the peasants of China under the philosophies of Karl Marx and the other gypsies he met when touring Mongolia for women, Mao set forth the Five Ear Plan.

Described as his most ambitious plan ever, he wanted everyone to truly be equal and free from the ideals of bourgeois intellectuals by giving everyone five extra ears. In doing so, Mao hoped to rely on the people to pinpoint imperialist counterrevolutionaries with their enhanced hearing capabilities and bring the capitalists to justice!

Unfortunately, just like the Cultured-Cheese Revolution, it was a Mao-sive faliure, due to the fact that 1.) people would often hear more than they wanted to hear at night in their prefectures (most young men in the Red Guard didn't mind, of course), 2.) there were widespread cases of hearing damage across the land, 3.) people could hear American radio signals in the air, which led to more prosecution and public criticism, and 4.) people looked absolutely hideous with seven ears total.

Hence, Mao created a famine to start with a clean slate.