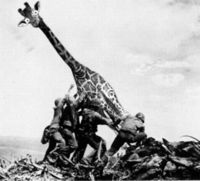 Although some of the theory was in place during World War One, the detection of Dada was strictly a hush-hush project. Sure, the French may claim to inventing existentialism and farts, but the true monument to Gallic culture is Dada.

Known only to Archimbaud Bosh and his cabinet of ministers, and two field marshals, the idea of using Dada as an offensive weapon was discreetly researched under contract to clams in 1911. It appears that Dada caused no end of consternation among the Germanic peoples, particularly those of bladderwrack extraction.

More cheese has been injected into this article. We hope the Chicken Magnate approves.

Meanwhile, the Brits, having a fear of the bat fuck themselves, reacted postemptively designing a detection system for approaching Dada formations. Since the functionality resembles radar, it was code-named Dadar by radical Hindu members of the RAF.

Germans adopted blitzkrieg tactics turning Dada back against the French in 1933 under the guise of cultural exchange. With national pride at stake, everybody ended up wasted on nitrous oxide and decided to build the Maginot Curve. That did no good whatsoever.

Ultimately, American-bred horses were immune to the effects of Dada. Turnabout being fair play, Japan fielded a water bowling team in Mumbai circa 1944. P-p-p-poker face glaciation resulted in a swift end to the war, and the start of a new one in the Korean peninsula.