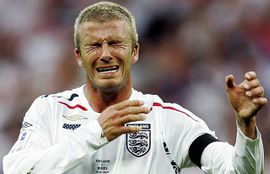 David Beckham is a person who might have, at one point or another, played football for a living. Yes, that's right: he once scored a goal from the halfway line, but then Maynor Figueroa managed the same thing, and he plays for Wigan.

That single incident, along with being sent off against Argentina makes up the whole of Beckham's career in the sport, not counting his celebrity wedding and that time when he managed to kick a ball of socks right across the living room and smash the television. Nobody was there to see the latter, so all we have to go on are eyewitness accounts from Beckham himself, and considering his past record of fabrication, sports statisticians have all but discredited the incident. The Daily Mirror, however, continues to recognise it as their editor's IQ is inferior to Beckham's.

Beckham is most well known for having thirteen metatarsals, each of which he has broken in the lead-up to various highly important matches and competitions. They are no use to him on the field of play, however, where he has to wear steel toe-capped boots to avoid losing them completely. In 1998, he once clipped an Argentinian on the back of the leg with his titanium-reinforced boots, causing much pain as the recipient of the 'kick', one Gabriel Bastardo, was not wearing back-of-the-shin pads at the time. Though Beckham was sent off for his 'misdemeanour', the whole incident was jolly good fun and a nice time was had by all. Except Bastardo.

Beckham's favourite food is boot leather, which he goes through at a frightening rate, especially considering the cost of manufacturing football boots these days. He made the revelation in Jello! Magazine shortly after he was found in the Manchester United dressing room toilets on all fours with bootlaces wrapped around his face. It is thought this strange, purportedly perverted preference (read: fetish) was brought about by his manager, Alex Ferguson, who would regularly stuff football boots into Beckham's mouth as a punishment for a bad half of football.

Beckham is married to a stick with chesticles, and has a casual relationship with Super Frankie Lampard. Neither knows about the other as a court gagging order, only due to end after Beckham's retirement from football, is currently in place. He also ate Jackie Chan when he was 11.