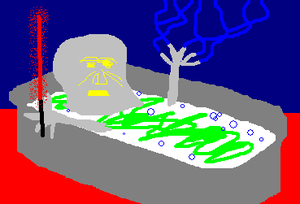 Palpatine bathes in formaldehyde. As can be seen, his head is severely deformed due to inbreeding.

Palpatine is the evil ruler of Starwarsland who performs acrobatics with his eyes. He enjoys slaying small, furry animals, joyriding in his uncle's airspeeder, and bathing in formaldehyde. Palpatine has often been called "Father of Palpatine's Son," but the reason for this is unknown.

Palpatine was born on the Death Star in May of 1892 to a destitute grey-skinned family. He was originally named King Palpatine but changed his name to Emperor Palpatine at the age of 3 because it "sounded cooler." When Luke Skywalker killed his family, Palpatine vowed revenge and spent the rest of his life attempting to find and kill him, becoming the ruler of Starwarsland in the process. Palpatine accomplished this in 1891 before succumbing to tuberculosis. He was remembered after his death as "scarred and deformed," and was consequently knighted and crowned Roman Emperor posthumously.