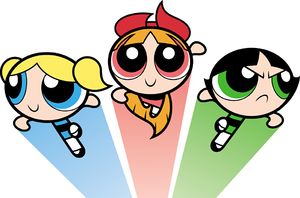 Why not take a break from this tedious rant and stare at the powerpuff girls. Have you ever considered they may be homosexual? (Note the 'puff' in the name, they don't seem to release sudden bouts of steam so the name seems to be Illogical.) Of course they are all young girls so that is quite disturbing thought and maybe what I just said then is a bit Paedophillic. Which one do you think is hottest? Personally I think the one on the left if she put her hair down a bit would be sexy, but the green one would look like a hot goth if she changed her clothes and grew her hair down a bit. That ginger one is just fucking annnoying. Do you think they have pubes? The ginger one does. Not nice.

The recent vandalism of the News section by my real life friend Ginonater was completely wrong and unacceptable. He claims that since Testostereich can vandalize the front page (eg. logo change) that he is entitled to it, too. Clearly he isn't. But is Testostereich entitled to? No. He brings up a point which is very true. No one is entitled to make foolish vandalism. I don't really care how long you ban Ginonater for. If you ban him at all, he will most certainly quit the site. He's already fed up and I disagree but I see his point. If TReich can vandalize, then everyone else should be able to. Obviously Ginonater will have to be blocked for an amount of time and I'll work my ass off trying to get him to come back but no matter what, though his methods were wrong and extreme, he brought an important issue to light. Please find it in your heart not to block him because I don't think it's necessary to lose a user just because they were trying to prove a point. --T3 05:34, 4 Arply 2010 (UTC)

First of all, when did TReich "vandalize" the main page? I don't know the context of the "logo change" you referred to, but I imagine it was a silly joke. That's not the same as repeatedly blanking the news section. Admins sometimes do goofy stuff like that. If ginonator doesn't think that's okay, he should TALK about it, rather than recklessly vandalizing the site. I'm going to warn him about it on his talk page and if he vandalizes the news section again than yes, I'll ban him. --THE 15:40, 4 Arply 2010 (UTC)

I agree with Ben and Jon, talking about cocks should be strictly forbidden on this website, but making the logo a subtle penis is perfectly acceptable —rms talk 18:48, 4 Arply 2010 (UTC)

I seem to have missed Gino's vandalism, but I blocked Testicles yesterday for changing the site logo into an MSPaintified 'member'. Just to let you know. -- Hindleyak  Converse • ?blog • Click here! 18:57, 4 Arply 2010 (UTC)

Guess I should say something[edit]

So yeah, I've been doing a lot of thinking, had me some black guy alone time and come to the conclusion that, like everything, these things have to be taken on a case by case basis. The ol' illogischlong was vandalism, but I was blocked for it and only really did it for a slight comical effect, owing to the fact all the laughs I get are derived from penis-related humour. Needless to say it was quickly reverted and I was magically rehabiliated (thanks for the intensive therapy sessions Dan). Blanking pages is on a completely different level, and is really the wrong attitude to have in these situations, it's like saying "if Testes gets to rape someone I should to", instead of "if Testes gets to rape someone, wait, he shouldn't be raping anybody, bad testes, go sit in the corner". One person's wrong doesn't justify your own wrong, it just makes you a tit.

The reason I unblocked myself was because i had adminning stuff I wanted to get done that I'd have forgot and not done if I'd stayed blocked. Evidently I wasn't about to go on some massive spree of page blanking and willy drawing (that last one's debateable). Anyway if it helps, I didn't edit between 5:00am and 10:00am this morning, which more than rides out my block time, so woot, let's put down the penises and move on people. Testostereich • (ballsack) 21:48, 4 Arply 2010 (UTC)

@Testes: I agree with you. Honestly, this entire forum topic was more about recognizing the issue instead of taking one side. I really don't care about what you did with the logo. Your raping analogy was genius, I have to say and it works perfectly. I just texted Ginonater that whole quote. His Internet is brokenz so he won't be doing stoopid shit tonight. I just got a text from him that says, "I was just showing that if he can run wild, why can't i? Or you? Or anyone" which is in a way, true. I still agree that he didn't have the right to vandalize or anything so yeah. Two wrongs don't make a right and we all have to acknowledge that. If I was you, I would write a message on his talk page or something. Cause he kinda thinks you're a power hungry dick who thinks they can do whatever they want because of their adminship. Yep. --T3 01:24, 5 Arply 2010 (UTC)

He thinks testes is a "power-hungry dick" for making a little joke? Putting a silly cartoon penis on the main page as a part of our ongoing "penis joke" thing is a hell of a lot different from going on some power-hungry blanking spree for the hell of it. I think ginonator's overreacting if he thinks testes's joke makes him a dick. Testes works his ass off as an admin, and occasionally has a little fun. That doesn't mean he "runs wild." --THE 04:54, 5 Arply 2010 (UTC)

Not my words. He currently thinks that Testes should be stripped of his clothes adminship. I'll try to convince him otherwise. --T3 04:55, 5 Arply 2010 (UTC)

I decided that it would be wise, given the number against/for votes without a clear winner of IotM, to roll it over for another month, then T3 decides that it is time to change it, at two on the first. I revert his unwise choice, with a clear notice in the recent changes stating the reasoning, to which he reverts without even discussing it (which was the suggestion). I was so close to dishing a ban, and now to take tomfoolery to a malicious level, I for one am not impressed. *ring ring* "hello? pot? yes, this is T3, yes, no, you're black" *click*. As for the actual topic, Abuse of power, not really, it was slightly hilarious, the aim isn't to be destructive (like blanking pages) it's to be interesting, if everything stayed stuck in stone it wouldn't be interesting, would it.--Silent PenguinLeave Me Alone 22:21, 4 Arply 2010 (UTC)

I CONCUR WITH EVERYTHING although frankly I think everyone just needs to chillax. Can't we all just get along? I mean there are only like, 5 of us... --