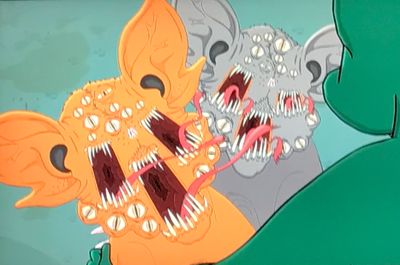 The original Gobshite emulator was developed by Karl Marx dba Glaasy-eyed Nobster Coding in 2004. Many businesses were adding live customer service in chatting apps at this time. Call centers experienced a shortage of gobshites to fill this emerging market. Rather than compete for bodies, industries worked together to find a solution cheaper than paying premium wages to a shrinking pool of talented cretins.

Since the early 90s, consumers were becoming increasingly savvy in their dealings with telephone customer service. Traditionally this had been the least costly department in virtually all industries. That's because in 1958, Andrew Snarffle at Proctor and Gamble discovered that customers calling for product support tends to hang up and drop the matter in frustration if the representative was stupid, rude, obnoxious or otherwise unpleasant. This idea became known as the gobshite principle.

It became policy at the company to skew the teams manning phones toward assholes. Soon the concept spread to competitors, and then to entirely different kinds of businesses. Call numbers declined and wages could be kept low, since most assholes have a hard time finding any kind of job.

The Heritage Institute was contracted in 1961 by a group of corporations refine the gobshite approach to customer service. Customers were beginning to be more resilient and developing tactics to track down an employee who could and actually would help them. Years of research yielded some small improvements, but overall savings were more than offset by a growing awareness in the asshole community of the value of their natural impulses. They'd learned that the word "gobshite" is insulting, putting "Wanted: Customer Service Gobshite" ads in a new light. Gobshite s were demanding and getting higher pay.

Marx's gobshite emulator works by translating input to something a gobshite might say. It has a wide range of asshole types and intensities, from a bit dim to 4chan obnoxious. Companies began to outsource much of their online live customer service to countries like Canada, where people are generally polite. This saved millions and put thousands of American butt plugs out of work.

There was an attempt to organize, but ultimately there were not enough people willing to something called the Gobshite Labor Union.

In 2008 Karl Marx licensed his code as open source. One of the wonks who does IT for Illogicopedia extended the code to translate articles. Beta testing is scheduled to begin late February 2017.