“RPS is a violent game, and as I concluded in my 32 page report, a ban should be set in place and enforced immediately, with rigid control from the authority. It is one of the largest propellants of deforestation, stone throwing, the theft of office equipment, and get this, encouraging impressionable children to make sudden movements with scissors! ”

~ The Government on on prohibition

Rock Paper Scissors, or RPS among absolutely nobody, is a game of skill, and occasional horse abuse played far and wide across the globe. . In RPS it's not what you know, it's who you know. For example you may know what the other player is going to use next and skillfully manipulate your hands to give yourself a winning advantage, but they could know a wealthy industrialist with great lawyers who can frame you for intent to assault and thus cause you to lose.

Rock Paper Scissors is not to be confused with Paper Scissors Rock however, a most dangerous cult that charges twice the cost price for its members to buy packs of polos branded as "God Mints". They claim these give you super powers but all they really do is cause stomach ulcers and make your farts smell like rosemary.

A brief look at the history of RPS[edit] 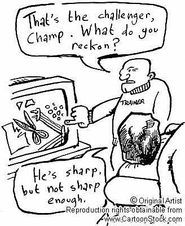 The "game" was invented by a guy called Steve, (6ft 2, blond hair blue eyes, looking for a long term relationship) back in ancient times as a new method of settling disputes. The longstanding previous method had involved one party throwing an axe as close they could possibly could to their opponent's butt crack. Though useful in ending their reliance on chairs (an object they despised most intensely), it proved detrimental to the the tribe's population.

Upon their search for a new procedure the Tribe Elder noticed how wrestler-turned-actor "The Rock" impressively dealt with wave after wave of pesky scissor attacks during his press conferences. As he sat there in thought, wondering how he could incorporate such an example of nature's genius a paper bag was blown by the wind onto the WWE star's face. After years of prancing around on stage, flexing his "guns", and pretending to wrestle the Rock had been left a terrible pansy, unable to fight his way out of a paper bag. Without the stage directions he had come to depend upon he quickly suffocated.

The scissors then conveniently sliced the paper open in direct view of the tribe, all the while dropping heavy hints that this could tie in with their butt axe problems. [plot device].

Partakers first must learn manipulate their hands to represent rock, paper, or scissors. This can take weeks.

After they have returned from the government-run RPS death camp they ready themself and the initiator counts up to three. In a flash of blurry digits the parties involved would reveal their hand signals to their opponent. Who win is determined as follows: 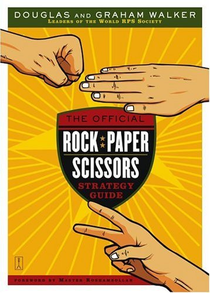 Rock Beats Scissors. This has its rootsin the great war of Grimsby of 1949. To resolve the issue, the two armies in question (four pikeys against some of the lads from the estate) entered into battle against each other; one side charged brandishing rocks, the other ran towards them with scissors. Needless to say those using scissors were immediately arrested and sentenced to a 4 month spanking for violating anti scissor-running laws that had been put in place after 9/11. Ever since then it's been widely acknowledged that rock is superior to scissors.

Scissors Beats Paper. Though paper often conceals a sharp edge that can cause considerable gonaddical pain when applied to one's genitals in a quick slashing motion, (I got bored, ok?) it is not specifically designed to cut objects. Scissors on the other hand were formed in the fiery pits of Stationary Box for that very purpose. So like, screw you paper.

Paper Beats Rock. Rocks breathe through their skin, so therefore rocks are instantly killed by paper, which smothers them. My friend told me, and he almost passed science at college - so it's practically scientific proof. I saw a science once, it was a shark.

After the winner has been determined the losers must submit to the victor's whims, a fate worse than deaf. RPS is used each day worldwide to settle philosophical debates, determine the next leader of a country and in some cases promote violence against particular items of stationary or geology. A woldwide betting industry has cropped up on the back of the game, riding off the versatility of the sport, and promoting such famous RPS player's quotes, like "Best o' Three?"

There are some 'bonus' moves you may do in Rock Paper Scissors, such as Bum, McDonalds and Pokémon.

RPS has numerous cheat codes. But many official RPS referees do not allow these. We don't care. Here's a list of them.

ROCK ROCK ROCK PAPER SCISSORS opens the portal to the next level, allowing you to skip opponents if they are too hard to beat.

If you are terrible at using cheat codes, or you just won't play fair, you can downright cheat, at the cost of your RPS reputation, and all the cheese in your fridge.

To downright cheat, punch the opponent in the face, and force them to use a losing handsign. Then, claim you win and take the prize. If the referee tries to stop you, punch him as well. In fact, punch everyone. Punching is fun. After you have KO'd everyone in the arena, take your prize and RUN FOR IT! You have just cheated your way into a RPS trophy.