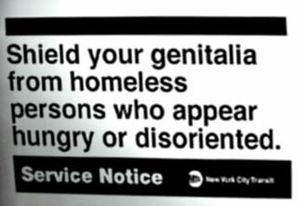 This new law is, however, unlikely to have an impact on the collective libido of the homeless.

In a move described as "disgraceful, immoral and slightly arousing" by Playboy founder Hugh Hefner, the British government are to collect 45% tax on all earnings made from begging.

From March 2013, homeless people around the country will be required to pay corporation tax, collected in an ironic fashion by 'the hobo taxman', who will guilt-trip those sleeping rough into paying their duty to Her Majesty's Revenue and Customs.

Following joint pressure from lobby groups TUT, TUT & TUT (Tax Undeveloped Trees, Tax Urban Toilets and Tax Upset Teachers), the measure has been introduced to ensure individuals living in cardboard boxes rather than houses "stop acting so sorry for themselves and just get on with it, for christ's sake".

This comes after the controversial decision last month to make it a legal requirement that disabled children are 'bullied efficiently' on a weekly basis in schools around the country.

Brian Blessed refused to comment on the story, and told us in an email: "How many times do I have to tell you, I'm not homeless, I just have a beard", adding later: "please stop attaching photoshopped images of my face on 'Hurley' from Lost's body to your emails".

Speaking exclusively to IllogiNews, Scott Terrific, professor of homelessnessology at Bumbledonnignton University, said: “They'll be fine once they get used to it."