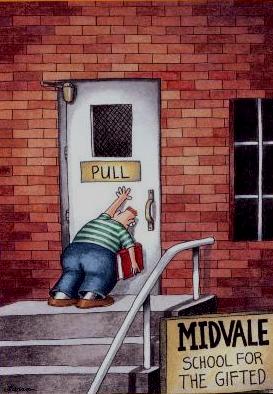 Intelligence is a gooey yellow bacterial substance found inside "intelligent" people. This hereditary parasite turns the sufferers slowly insane. The victims' quavering souls are ripped into little squares as they find themselves able to grasp the concept of things they never could before - it's so unnatural! Eventually after a ninety year gestation period (it doesn't matter if the host human is dead by then) the disease will die. "Dying" really doesn't do it justice - when that bugger dies, IT DIES!!! Noticeably the yellowy goo will began to leak out of the humans' ears before their head explodes.

This is perhaps, the only reason people obcessively avoid walking on graves. The last time two bold yet foolish people stood on one, the intelligent diseased occupant of the grave blew up. Throwing the unsuspecting grave walkers thirty feet in the air before coming back down to earth and impaling them on a well-placed pointy old person. The most noteable head explosion is Pope John Paul II who exploded during his morning blessing.

The History of Intelligent's Life[edit]

It is believed by experts that intelligence first arrived during the war of the world. We had just beaten back the technologically advanced space invaders using wooden clubs, fire, and a wrestling technique known in Mexico as the Monster Munch when a fleeing alien had the audacity to cough and not cover it's mouths with it's hand. A huge bouncing yellow goo-ball flew out of from its throat and infected anyone in the vicinity. Since then the disease has continued to opperate in the same way, though it's reactions have slowed a bit and some of the yellow goo is going grey. It is intelligence (or lack of it) that lead to gingervitis.

The only known way to combat intelligence was discovered by hilbillies in rural America during the American civil war and more recently by chavs in council estates: inbreeding. The result of passing on very similar genes from each parent to the baby often results in any intelligence festering in the unborn child's mind to be instantly burned to a crisp and replaced with tumbleweed. Chavs do this continually throughout their life cycle and thats why they manage to live to the grand old age of 23.

The Infection of the Mighty Illogia[edit]

At the beginning of the universe the stars, the planets, various internet based encyclopedias, the animals, the plants and the humans were created. However the War of the World had already took place. Formerly known as logicopedia, we were infected with the disease. A few last survivors managed to contact wikipedia in time to warn them. And thats why we're all insane here at illogicopedia-lalalla silldfdesf. eeble sonk. PLAIIY!!! MUHHAHAHahahahahHAHAHAAHA