The Internet Gods were the ruling pantheon of gods that existed prior to the First Flamewar and resided almost exclusively in the Forum Of The Gods, their rule was a long and tiresome one that ended dramatically when Master Troll was formed from the sea of whining and caused the Internet Gods to destroy the Forum Of The Gods in a fiery tide of nerd-rage and righteous fury.

Master Troll is one of the central figures of Internet Mythology and is the patron god of Trolls - his many exploits can be found on his own special section (because he's a big show-off):

Master Troll was aware of this disaster but approved of Epic Fail Guy at first, believing him to be a fellow troll, unfortunately for Master Troll his tolerance of Epic Fail Guy would lead to a personal attack from the monstrosity and spark what would become known as the "Mother Of All Battles". 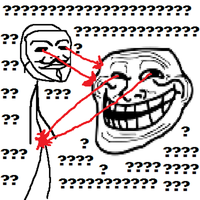 The "Mother Of All Battles" refers to the first confrontation between Master Troll and Epic Fail Guy, an event that would change the course of Internet Mythology as the two beings engaged in a massive battle that lasted for seven days and seven nights.

At any rate the seven day and seven night battle between the two beings was said to be an awe-inspiring sight as Master Troll unleashed his full power upon Epic Fail Guy only to find himself nearly overpowered by Epic Fail Guy's unrivalled command of failure.

However as with all good mythology (except that crazy Lovecraft) the battle between stupid and stupider was won and Master Troll prevailed, saving the Internet from the massive amounts of fail that Epic Fail Guy was sure to unleash..

In celebration Master Troll hacked into the accounts of all his followers and infini-banned them, though he would give them back their accounts in time after helping himself to half their life savings (showing he is indeed a merciful soul).