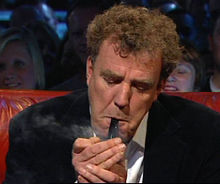 “And now for the sweetest car you will ever see, the king of automatic vehicles... Richard Hammond's winkle!”

Jeremy Claaarkson is the most hated man who ever lived... in the world. He once got beat up by a gang of black youths and still tried to persuade them to buy "the super car of super cars, quite literally."

Clarkson was born in Donington Park racecourse to a Ford Cortina and an Austin Allegro and raised by a pack of cars.