For those looking for a German view on the subject, the Camels at Kamelopedia have an equally strange article on Auto or even Volkswagen; yes even Skoda

“CAR, THE CAR AND NOTHING BUT THE CAR.”

“The car (ahem) is something that is funny and gives you lolz and stuff like that but me? Nah it makes me do a la the shiz in a la the pipe hole!”

Cars can now be purchased from high street supermarkets.

“Cars were a bad pop group.” 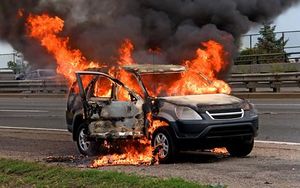 “If it weren't for cars, how'd anyone get around?”

If you see a car driving, let it go because it's a car and can likely run you over if you're on foot.

“The first time I ever saw a car was when I was a little baby and I spit my mom's tit out of my mouth and said, 'Holy shit! That's a car!'”

~ Albert Einstein on the downsides of using kerosene as hemorrhoid treatment

It's the remix to "Ignition," hot and fresh out the kitchen[edit | edit source]

Cars are easy to operate. Just get inside, put down your rug, and pray in the direction of Mecca five times a day.

“Wait, isn't that what Jews do on Passover?”

“Jeremy Clarkson can be quite the twat.”

Cars are dangerous creatures, as shown in the Stephen King novel Cujo, where the dog eats the family because the car told him to.