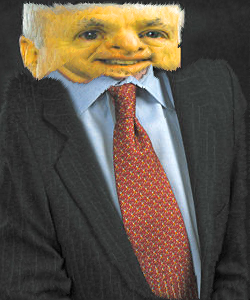 John McCain[1] is a minister of zookeeping. He also happens to be my friend of 7 seconds (but only for namedropping reasons).

He tried wearing his hat on backwards in order to be "cool." It didn't work.

He stood out from the other candidates for president in 2008 not because of his impeccable voting records on national defense and "getting the cheese out of pizza slices" - he has high scores on all those things - but because HIS FACE IS MADE OF GOLD and weighs 50 lbs.

He uses laxatives in ways man has never dreampt of.

His car is a modified hippopotamus. He owns a bus built especially for him to ride in, and that makes him elitist[2].

He lives on The Daily Show, with JoHn Steward[3].

The coup de grace: he is a french fry.

Did I mention he's my friend? He said to me to say that. 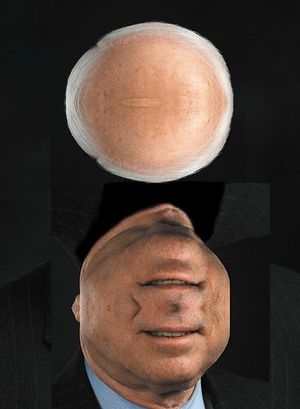 The Ball of All, or brain housing, floats gracefully above his two mouths. 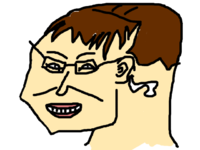