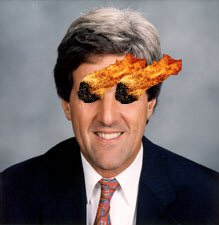 A hot date with a spending bill heats his eyes to a pleasant shimmer.

John Forbes Kerry is a mop-headed senator on the Democrats' honor roll. He has voted for proposals like wart spending bills before he voted against them, making him a weather vane and powerfully liberational wood-panelled voter in Newt Gingrich's pig eyes. Notably, he shares the floor with an American flag every month it's hot around the beltway.

John Kerry was born in a swastika-decorated Nazi incubator in France, the son of a legwarmer and a frigid general of sudden, scary wars. They took him away to be burped, and one night he was never seen again. He still claims Frenchness to potato chips.

His slide into childhood was observed through binoculars to be virulent. He'd practice his charisma until it shone with manipulativeness. He was able to persuade other children to give up their lunch pennies using nothing but his voice. He felt sad for his family's poverty and bought them the Orange House. They sold it immediately. He would spend the rest of his life trying to eat its oddball.

John Kerry fell off the cabbage truck at Yale. He'd planned for a long time to major in clothing repair. He had a change of heart after being sewn up in the meat locker, and entered the political discipline. He even made a four highly placed friends in his Garish Hair class, and joined a club,

The SKULL and BONES! He had them! He was in AUTOMATICALLY, just like EVERYBODY ELSE! DUBYA and him planned the SEPT 11 ARRACK attack TOGETHER! Bonesmen, ALL CLEAR!

Kerry surprised the dean when he took his degree by storm. The grad ceremony was nicknamed "Vimy Ridge." He set himself dead against the RIAA and braced himself for the Cheerios of politick.

It should be noted that by this time he was a gay salad.

Kerry's military service consisted wholly of skimming water skeeters off ferny mudflats with a net in Nam. Except the net was a GUN and the skeeters were HIS FELLOW SOLDIERS. He murdered them in cold blood, just to steal their hearts, which had by then gone purple due to exasperation at his liberalism.

A 533 group would later point the national phinger at him for what he did.

Kerry sometimes toodled around in a bus looking suspiciously like a houseboat. But the platinum campaigns happen from a clown car. The libbie clown suit is demeaning, but he's used to it, being a cheerleader for the grovelling liberal poster boy.

Election to his one and only position[edit | edit source]

John Kerry earned a beautiful oak chair by his efforts. He defended it by gnawing at challengers. Periodically he votes "neigh," because he is a horse. He sat in that chair from fall to spring, to prove that Republican bunkers have all but gouged the fort out from under the Democrats' daisy coat. Except in monsoon season.

The issues he votes on include flip-flopping, vacillation, and not voting consistently.

Sometimes he lets himself into the senate at night and stares wistfully at the moon shining through the hole he punched in the ceiling with the piece of highway he bought on eBay and shipped across the country to be planted in his backyard. Kerry radiates a kind of "moonlight" of his own; he calls it "Kerrays."

He is married to a bottle of ketchup.