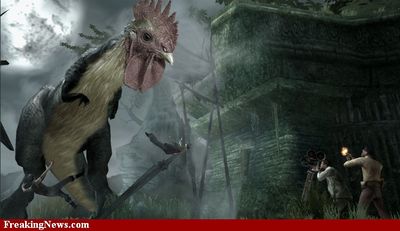 In some cases, like that of the great Chicken Messiah, a prophet or manifestation of God will go on a rampage.

The word messiah has it's origins in the deep, musty past of ancient Canaan. It is a conglomeration of three Canaanite words; "mes" (to con the gullible with mystical bat shit), plus "siah" (a sanitary pedestal), plus "zschietchnegjlotl!" (bring some decent wine to the party this time, you cheap bastard), and translates roughly as "woo!", a mental deficiency caused by confusion of fantasy and what passes for objective reality.

The first extant written documentation of the word, in writing, was dug up by Siamese twins Carlos and Ricardo Clicker while Carlos was putting time in at an archaeological dig in the Czech Republic in 1988. The potsherd with the words "Lo, the crocodile was messiahed into the grape vat, whereby demons massaged it and sang about root cellars".

During the Time of State-sponsored Bowling, many Israeli citizens snuck under fences to form the Chicken Messiah Party, seizing the middling kibbutz and installing support pillars in the shape of giant, fearsome, fanged bunnies.