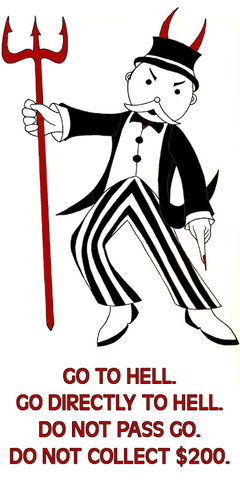 A card from the game

“A fun death for the whole family!”

~ Back of the box

Monopoly: Afterlife Edition is one of those special editions of the classic Parker Brothers board game which suck all of the actual fun out of the original game, (which is really all about getting to hold fake money and pretending to wear a monocle) all for the sake of a licensing deal to advertise some other product or franchise. This one is licensed by God, or rather, through God's official celebrity endorsement and licensing company, God Incorporated. The squares and game pieces are still there, but you don't get to hold any of the fake money because all the money really belongs to God and you can't take it with you.

Apparently, the "family fun" doesn't stop at death. Players progress through the afterlife going round the board in cycles of reincarnation. They buy and sell different eternal destinations like "Fluffy Cloud Heaven", "Fire and Brimstone Hell", Ghosthood, Inferno, Purgatory, Paradise, Nirvana, (yes, the band from Seattle) Valhalla, Elysium, Tartarus, "Asphodel Fields", the Underworld, the "Blessed Isles", Stovokor, The Divine Treasury™, "72 Virgins", "Davy Jones Locker", "3 Glories", "Outer Darkness" and (for atheists) "Rotting in the Ground." One of the most expensive squares, corresponding to Boardwalk or Park Place and representing the Mormon afterlife, simply reads, "Having Your Own Planet."[1]