~ Santa on sightseeing in Amsterdam

“Santa is really just a hobo in fancy clothes.”

"Santa?... is that you?" I asked nervously. The banging noises coming from inside the chimney didn't stop. My heart was pounding. Could it really be him? I mean, it was July 28th, and my family was Jewish, but still... there was a chance. I yelled out once more: "Santa?". This time, the clamor briefly stopped. I heard a muted voice yell "Shit. Someone is here. Pull me up, Jimmy." Would Santa curse? Well, maybe. He's an adult - he's allowed to. But who is Jimmy? It must be an elf, I decided. 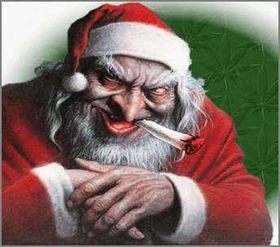 I don't think it's Santa[edit]

Just then, with a loud crash, a man dropped down into the fireplace. Although ashes covered his entire body, I could tell at this point it was not Santa. It was "The Chimney Burglar," just as I imagined him from the newspaper descriptions. He's been terrorizing the neighborhood for weeks, and the police was powerless to catch him. I feared for my life, but... maybe Santa WAS the Chimney Burglar. It couldn't hurt to ask.

The man quickly recovered from his fall, pulled out a gun, and made me sit in a nearby chair. Tying me up with some rope, he asked where the family jewelery was. I told him Papa keeps it locked in the safe, but I don't know the combination. He then started rummaging through all the cabinets in the room. I saw he had a big burlap bag with him. So maybe it was Santa. You know, Santa does carry a bag full of presents with him. But it looked like this man was putting things into the bag, not taking them out.

After the chimney burglar shot me in the leg, I concluded he really couldn't be Santa. But hmmm... what if he decided I was a naughty boy this year, and this was his punishment. Those were my thoughts as I slowly lost consciousness due to blood loss. Meanwhile, I think the burglar got into Papa's safe. Maybe he was looking for milk and cookies.

At one point I dreamt Santa was taking pictures of me. I felt cold and exposed. Then again, I may have been wavering in and out of consciousness.

The next day I awoke in the hospital. Mama and Papa and my little brother Timmy were there. I was so excited to tell them I saw Santa! They couldn't believe it! But I knew what I saw. Santa is real, no matter what anyone else says. I know - I even talked with him!

But one thing I still can't get my head around, there was no sleigh! All I saw was white transit van pulled up outside my house and a creepy man shouting go,go,go but I assumed he was shouting ho,ho,ho but that still remains a mystery. Finally, Santa took my hamster I shouted no not my hamster take my sisters dog he replied no I prefer the taste of gristle. In my opinion I think he said this because he failed to locate the milk and cookies so he needed some snack. Any way I guess santa going to be in the BBC News