“Frosty the Snowman was a very happy uhhh... thing.”

Snowmen are, as the name implies, men made of water molecules that were frozen at high altitudes and later dropped to the ground. Or you could just say that they were made of mustard. 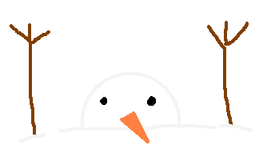 Snowmen are creatures that can grow up to six feet tall, or as small as a ☃. They begin their lives as water, and after several steps are eventually snow, aka Canned Feathers. This snowball gets larger, and screwed into a snowman (yes, it is a mother fucker). They only live during French parts of the year, most commonly the month of Marctober, due to sexual reasons. They feed on dust and moisture in the air. Often times Snowmen can't mature fully, due to symbolic reasons or perhaps the snow they were made of wouldn't pack well. However, some can reach the size of Shaquille O'Neill. The largest known snowman on the face of the earth was 15 feet tall and made of cheese, twenty-eleven inches short with two bunny ears for a scarf. Their facial features often include small rocks that were painfully shoved into their delicate face, as well as carrots that were jammed right in the center of their face. They also commonly have sticks jabbed into their sides, often puncturing major internal organs, to represent arms. Imagine having to live a miserable life of a snowman! However, some are are made of snow. Often times they have certain accessories including scarves, top hats, dicks, and leashes.

Snowmen are often found in areas where snow is abundant. No snowman has ever been found in Death Valley or in the Sahara desert, however some claim to have, but there was no turkey. They are often found in areas either far north or far south, such as the Arctic Tundra or Antarctica. Penguins are famous for their "Snowpenguin" sculptures. Snowmen have been spotted in San Diego, however they were made of plastic. 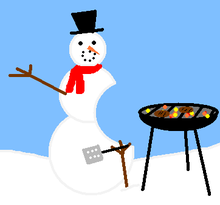 He is melting. Heat is his enemy.

Snowmen often eat nothing, and in order to live are forced to reap as much moisture and dust from the air as they possibly can. Often, if they are lucky, an innocent winter rodent will wander too close, meeting its grim demise as the snowman struggles to survive. Whenever confronted with something smaller than itself, the snowman usually devours the organism quickly because of extreme hunger. Avoid snowmen that are larger than you at all costs.

Have only three weaknesses: Heat, Tire Swings, and Linebackers.

The associated weakness with snowmen is heat, often in the subcategory of the sun. Ice must maintain temperatures below freezing in order to survive, but when the sun comes out the temperature usually rises above that mark, letting the snowman meet his slow and painful death. Another enemy of the snowman that is heat-related is the grill. Snowmen can no longer prepare their own burgers and hot dogs without melting half of their body and losing one arm in the process. Coffee is also a major injury-causing object to snowmen. Hot coffee in a mug will quickly melt the snowman's hand. And no longer can a snowman sit by a campfire and sing songs, because the heat radiating towards him will turn him into a pile of water. That means no more s'mores for Frosty! Waaa!

Snowmen never wanted anything to do with tire swings. Never. Sadly, however, they were introduced when obnoxious little boys had made them, but then swung a tire swing at the snowmen and hit it and made the snowman explode and die and blood was everywhere!!!!!

Lin backers are good at tackling. And so they can run up and just tackle the snowman, blasting him into oblivion. The Linebacker could do that to all of the snowmen.

Several snowmen have made names for themselves. The most famous are probably Frosty and the Snowman of Williamshiretownville. Frosty was a television star, stealing the hearts of millions of American youth, while the Snowman of Williamshiretownville led a magnificent Snowman revolution against the volleyball players of the world, but they lost horribly because they melted at the beaches where the battles were.