A space nose is a type of nose sometimes observed cruising through solar systems. They are known to harbor herds of cats, sometimes ejected through nostrils as invasion fleets or, occasionally, for diplomatic purposes. The herds of cats are believed to exist in the spacious interior of nose pockets, the contents of which in large part otherwise remain mysterious.

When large amounts of material are seen sneezed out by a space nose, it usually accretes into one or another type of object as part of what is apparently well-coordinated construction work. 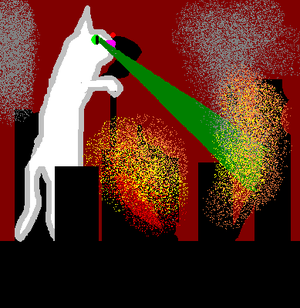 Illustration of a cat which has landed and is present on a planet so as to exert subtle diplomatic pressure.

The remarkably spacious interior sometimes house other parts of a space fleet, such the cat, a crusader which meows when it visits a planet with an atmosphere or a dense-enough gas cloud in space. Cats are not always smaller than the noses they enter and exit, but are on the whole much more numerous. Their destructive power has made them a means used by civilizations seeking to apply political pressure on other civlizattions in exopolitics.

The most commonly used peaceful means of waging war among conflicting planets not added to one another, in the depths of space, is the most reticent sending out of fleets of green noses. They may collide, they sometimes violently eject balls of plasma, and there is the possibility that they may sniff out the intention of more than one side involved in the conflict. Green noses are not to be confused with the Big Blue Nose.

In times of political tensions which approach but do not reach the level of war, regions of space have occasionally become inaccessible to telescopes and for travel alike, due to the large amounts of obstructing matter which have ended up in the way after being ejected by noses belonging to conflicting factions.

Possible signs of an apocalypse[edit]

If a big nose enters the atmosphere, and the strident, metallic meowing of space cats fills the air, some variety of apocalypse may be near. Such events tend to coincide with planetary demolitions. At other times, especially if the planet is small, a large part of its atmosphere may possibly be stolen by the big nose, and/or hazardous material dumped by it. Various other things may of course also occur, but in any event, if such signs are noticed, it's wise to teleport to a safe distance as soon as possible, until more is learned about the developing situation.