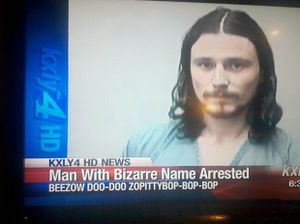 ...so, I was standing in line at Walmart the other day, and this guy bumps into me, and I take my shirt off, start pulling my hair out and making chicken noises. Scared the bejesus out of the guy. That's gangsta, son.

This other time, I had drank 4 fifths of Crown Royal and smoked 77 blunts by myself, and these 8 college kids were walking across the bridge, and they said something to me, so I kicked all their asses and threw two of them into the river. The cops showed up, and took my side, of course. That too, was gangsta, son.

Another time, yo, I had just put a 6 barrel Holly carb into my cherry '68 Camaro, yo, and I was on Aiken street at the lights by Vic's diner, and I hear this loud, like whoosh noise, yo, and the space shuttle lands right next to me just as the light turned green, so I dragged him to the bridge, and I won. That was also gangsta, son.

As I write this article, I see that my spell checker accepts both "gangsta" and "yo". That's surprisingly gangsta, son.