From Illogicopedia
(Redirected from The Moon!)
Jump to navigation Jump to search

"The moon" and "The Moon!" coexisting side by side.

“And if the band you're in starts playing different tunes
I'll see you on the dark side of The moon!”

~ Pink Floyd on The moon!

The moon! is Earth's alternative natural satellite which Wikipedia seems to deny the existence of. Rest assured it does exist, but only to poke holes in the general public perception of said factual wiki. I say it exists, but only in the same fashion as a goat on the other side of the world. You can't see it right now, but you are sure it's there because you know, from reliable sources, it really is there.

This makes it all the more strange that Wikipedia continues to deny its existence. If only those eggheads would look behind the moon (yes, the main one), they will indeed see the second natural satellite known as the moon! The moon! can be found precisely three miles to the rear of the moon from whatever position you are looking at it, requiring the use of a complex mirror system to be visible to the human eye. 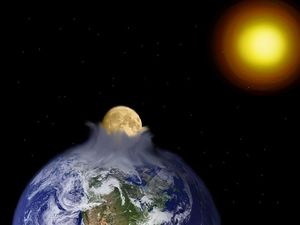 The Moon taking a swim in the ocean

Though many people seem to think that the the moon! and the moon are composed of cheese, this is clearly not the case. It is actually made of plasticine and nerds, and was formed when the Comic Book Guy called all his colleagues on Facebook and forced them to have a plasticine eating contest. Everybody barfed at the exact same time, resulting in a giant barf bomb which blasted them into space with all their chunks of plasticine. Flung into the outer reaches of the Universe at the speed of light, they generated huge amounts of magnetic energy, pulling the Ohio Magnet Factory out of the Earth and crunching all 6,000,000,000,000 square miles of it, creating the moon.