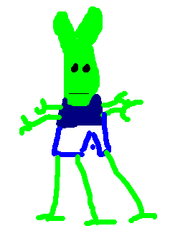 One day this alien (right) invaded Earth and sent a message to all humans saying "Hey, how ya doin'?" People were so frightened by this incident and the alien was officially named the OMG Scary Alien. The OMG Scary Alien wondered why he was so feared. He just wanted to say hi. It's not like he came in a flying saucer or that crap he came in a Toyota Camry for cryin' out loud. I mean ARE YOU FREAKING KIDDING ME? He had no bad intentions but no, all those freakin' invasion movies messin' 'round with people's minds, dang.

The OMG Scary Alien decided to send a message to the humans. He wanted to say "I come in peace" but he realized it was ridiculously cliché so he put "I don't wanna hurt you humans". When the humans got the message they said, hey maybe this guy ain't got bad intentions after all. The OMG Scary Alien was instantly famous. He had t.v interviews and candy bars named after him and crap. He had a movie made after him and it was awesome.

WARNING: None of the people quoted actually said these things. Maybe.

“The OMG Scary Alien is awesome”

~ Some teenager on the internet

The OMG Scary Alien is a very distinct creature. He has many features such as green skin and bunny ears that are only a solid color. He has a dark blue shirt with light blue pants that the artist forgot to color in when drawing him on Microsoft Paint.

The OMG Scary Alien is overall a pretty laid back guy except when it comes to stupid horror movies. He once shot a horror movie director because he made the stupidest horror concept ever, the movie sucks, it is also known as "Saw". The OMG Scary Alien is a really nice guy except, again, when it comes to stupid horror movies. He doesn't like when humans think he's trying to kill humanity, seriously he's not. Get over yourself and give the alien some respect. Geez... He doesn't like rednecks and is much like the creator of this article. He enjoys creating useless things very much and gets pissed off when people don't help him make it.

In late 2008, The OMG Scary Alien was killed by Silent Penguin, shortly after battling and befriending Flub Nugget, who was also killed by Seppy.

Q & A with The OMG Scary Alien[edit]

Q: Mr. Alien, what do you think about humans?
A: They're okay, as long as they don't try to kill you, or make a series named "Saw".
Q: Why do you hate the "Saw" series so much?
A: Why wouldn't I?
Q: Agreed. So Mr. Alien, is it true your first movie The OMG Scary Alien Goes to Town will appear on YouTube?
A: I am making it official, yes it will.
Q: When?
A: Anywhere between July 21st and August 10th or something, I really don't know the window.
Q: What is the storyline of this movie?
A: You know I can't say that.
Q: Will it be a long movie?
A: No, ridiculously short.
Q: Are there any famous people in the movie?
A: Maybe...
Q: Is it an action movie?
A: Yes, straight-up action.
Q: Well, we've heard you wanted to come out with a clothing line. Why didn't it work?
A: I have three legs and four arms.
Q: I see. I heard you have a website.
A: Yes, it is at theomgscaryalien.com.
Q: Okay.
A: Well, I have to go, bye!