There is no compulsion in religion

I've heard it said by people that "there is no compulsion in religion". What exactly does that mean? 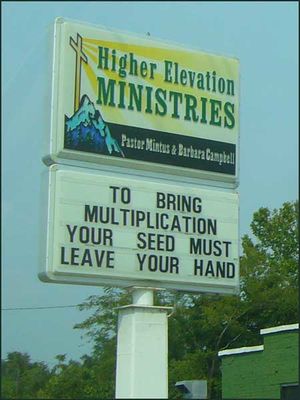 I wish someone would explain it to my family, because ever since I quit attending church regularly, they've been trying to compel me to return. Sure feels like compulsion to me. Of course, when I say "compulsion" what I really mean is "spiritual extortion".

At first they were gentle, expressing polite concern than I might be endangering my soul to immortal peril. Later, they were more emphatic, warning me that if I didn't return to God, we would be separated in the afterlife. Somehow, inexplicably, this prospect seemed very appealing to me. Naturally, when I say "inexplicably", I mean that it would be rude to come right out and say "I hate you all." So, completely inexplicably, I said nothing but allowed myself to slide away further still... from being an Advent, All Saints' Day, Christmas, Easter, Lent, Palm Sunday, Shrove Tuesday, Ash Wednesday attendee to just an Easter and Christmas bandwagon rider.

When I was warned again, this time in no uncertain terms that I was surely on the Expressway to Hell, my soul rejoiced. I promptly traded my Toyota Tercel for a Ferarri Mondial, and bought a pair of leatherette asbestos-lined driving gloves. Bliss.

Reflecting on my past experiences in church, I wonder what about it might have compelled me to want to stay there. Among the strongest compulsions I can recall:

Time and distance has provided the perspective that has allowed me to better understand these compulsions now.

And, upon further reflection, perhaps I'm way past due for another trip to church...