A shark with a moose 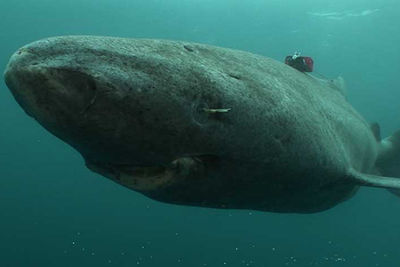 It is rumored that the same space aliens who built the pyramids at Giza also seeded the Earths oceans with these magnificent Greenland sharks. On their home planet, sea moose are probably commonplace.

A great hubbub has recently arisen about a Greenland shark which was found beached, with a two foot long chunk of moose stuck in it's throat. This amuses those of us in the know about conspiracies to take over the world. We also know the real truth behind a host of supposedly insoluble questions. Space aliens, of course. Those same space aliens who built the pyramids at Giza and taught the Inca binary knot language seeded the oceans with, among other things, gigantic moose-eating sharks.

Recently, the corpora-governmental information dike leaked, for the first time, documented evidence of a shark which eats moose. Info-technicians carefully massaged the leak,

Gir has a moose. That's why he went to the library.

a chance discovery by a yokel, to project the idea that this was a fluke, a freaky once in a lifetime event which is best forgotten after through discussion about the water cooler (or buffalo, as the situation may warrant).

These sharks, deprived of the plentiful sea moose on their home world, have developed an extraordinary adaptation for acquiring Earths land moose. They are able to hold their breath, teleport to within 4 inches of a targeted land moose, grab the prey and teleport back to the sea, where they can drown their din din before rending it into manageable bites.

Shark beached after choking on moose