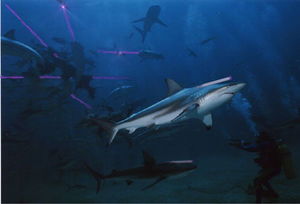 The only person ever known to have the genes of a shark is Hywel Corbin, his node is so big it is thought that he inherrited the nose of a shark.The name 'shark' is a misnomer. Sharks are very worried about looking cool at all times, and they constantly say to each other "Sharp!" as a greeting and indication of how they look. A Lack of lips and the resulting thpeech impediment has resulted in the garbled "Shark!". Hence, the cause of 90% of all shark attacks is resentment of having their speech issues mocked.

The shark has often been referred to in the Nothing and Dumplings adventurous adventures. According to this, if one is to be half-eaten by a shark they must be directed to the nearest self-operating wheelchair immediately, upon which they will ask Lara Croft if she is impressed. Upon the mention of the magic word, 'noodles', the spell is broken and the victim regrows his limbs; like a starfish, but better.