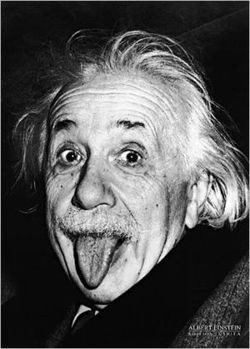 Einstein, showing the camera what he did to my mom last night.

“Why is the English translation of his name "A stone" when he is so smart?”

Albert 'Friggin' Smart' Einstein 1879 – 1955) was a German-born theoretical physicist, and the world's first true gangsta. He is famous for his theory of relativity, and specifically the parachute-pants equivalence, E = MC Hammer. Up through the 1930's, his German detractors championed the notion that this and his simultaneously developed quantum theory was all BS "Jewish science" until they woke up one day and realized they could build a bomb with it. Thereafter, it was revealed that Einstein's work was plagiarized, having suddenly been expressed only a few decades earlier by Max Planck, Henri Poincare or other lesser known gangsters. These Einstein referred to as "hairy-assed playa-hatas."

Einstein was known to think better with his pants off, which is how he discovered the "So called famous formula" - Failed to parse (MathML with SVG or PNG fallback (recommended for modern browsers and accessibility tools): Invalid response ("Math extension cannot connect to Restbase.") from server "https://wikimedia.org/api/rest_v1/":): {\displaystyle E=mc^2}

When Einstein invented space, time and espresso he realised that if you go really fast, like Kenyan athletes do, you get really small which explains his of his formula E=MC². We often wonder what it stands for or what it means from the point of a editor from the Observer newspaper. Unfortunately Einstein got in a feud with the Nobel Peace Prize committee and refused to tell anyone until they apologize with a pair of smoking shoes of his size.

Although we may never truly understand Einstein's Theory of Relativity, it is assumed to be related to the concept of relative association in that where this is a way there is a will, and that where here is will there is likely to be a relative. 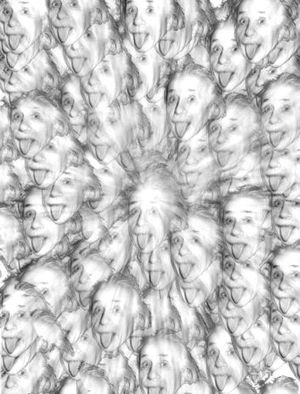 'Einstein passing though every point in the universe'.

As we all know Einstein's life came to a tragic end when he imploded in a spectacularly unsuccessful attempt to win a bet that he could generate a mini black hole by cycling around the world faster than the speed of light. Then tragedy struck as Einstein drew level with the velocity of light he became infinitely dense, instantaneously passing through every point in the universe. This had the unfortunate side effect of giving him infinite gravitational force which in turn caused the infinitely large Einstein and the entire universe of space and time to fold in on itself until it disappeared into an infinitely small point that is commonly referred to by some of the world's most respected theoretical astrophysicists as a "lil' biddy dot". 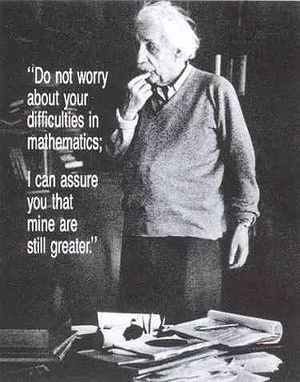 Einstein as featured in MA1

An alternate, now disregarded theory suggests that Einstein died as a result of his brain spontaneously dividing π by 0. E= mc2 is the result of his death. 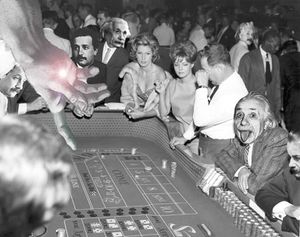 There is increasing speculation that the story surrounding Einstein's death is more intricate than previously thought. Many moustachologists believe that he actually traveled through time to 1996, changed his name to Des Lynam and forged a successful career as a British television presenter. Credence to this hypothesis has grown since the sudden disappearance of Des Lynam in 2006. While cynics propose that Lynam is not in fact Einstein and merely faded into obscurity after being fired from his job on Countdown for being too boring, realists believe he traveled back to his original time.

The truth about Einstein's tongue[edit]

According to secret historical documents in the Pentagon, Einstein's well-known picture was taken while he was licking a Russian prostitute. Actually she wasn't a prostitute: She was an NKVD agent. It was the winter of 1926 in Germany. Because of the economical crisis in Germany after World War One, there was no coal to warm up. Sly Soviet agents were aware of this situation; they also were knowing of Einstein's excess libido. So, all they need were a beautiful woman and a camera. And someone to use the camera, of course. After Einstein began licking, the cameraman were coming close slowly. But the cameraman involuntary hit the furniture tripod. Einstein discovered him. The cameraman was still trying to do his job. While Einstein was looking on the cameraman with confused eyes, he attempted to say "whadda fuck is goin' on?". But he couldn't. Because of the cold weather, his tongue stuck down his chin. So shame... "The great physicist" hadn't got a foresight about what's the combine of cold weather and wet objects. Meanwhile, cameraman took the picture and went back to Moscow. Stalin purposed to use that picture to blackmail Einstein and get him with the precious scientific secrets which would accomplish the Soviet Nuclear Program. But the plans didn't work any more. Because there was more "hardcore" photos of Stalin, Lenin and Trotsky, those taken in an orgy made in Kremlin. (Rumours say the orgy pictures transmitted to the USA by Trotsky as a result of his strive against Stalin.) Roosevelt threatened to publicise those pictures if they don't return the picture of Einstein. And Stalin stepped backward. 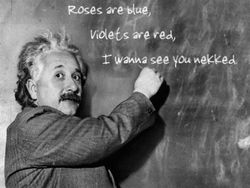 With this photo we can definitely assume which sex Albert Einstein was, but the question is which.

It has been theorized by Einstein himself that this is perhaps the stupidest section in this article.

Since they were both born Albert and Pythag have always been at war. Even during maths classes with Mrs C Roberts in MA1 they fought, trying to come up with the most intelligent formulas and theories. In the end Albert won by bribing Mrs Roberts with a sack of parsnips and he got top degrees. After school they went their separate ways with Albert going to Germany, then America, and Pythag going to Samos and then Memphis Uni. 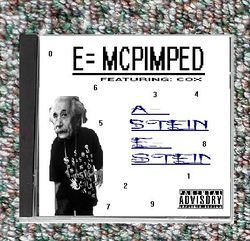 Rare copy of E=MCPIMPED found in basement of old packrat

Eventually they both made their career defining theories, Einstein's E=MC² and Pythag's a²+b²=c². At the maths awards at the end of the year, Pythag won the maths award for Best Theorem, but Albert couldn't bear to see him win so he cut him down with his secret weapon, before claiming he won and hypnotising everyone with his maths. This was the end of their feud, and Albert then became known as the world's greatest mathematician, and Pythag was quietly forgotten by all but Mrs C Roberts and kids who have to learn his theorem. 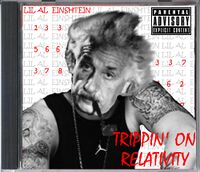 Einstein was once completely set for rapping, he went by the name A-stein E-stein. He teamed up with the likes of Kid Rock, Eminem, JAYZEE, Weird Al and Reuben Glaser. He has had a few albums out, one was labeled "PI Sucks ASS". Due to the large words and frequent references to science, Einstein's first album didn't sell well at all. His partner was a small black man named "COX" who later committed suicide after Einstein's second attempt at an album called "E=equals MCpimped2." His hit song from this one was "Big Brains Bring Bucks". But once again his attempts ended up bad, this album only sold 742 copies. Einstein was now without COX, or rapping skills, so he tried once more at an album, this one was "Gimme All Da Plutonium!" This album had only 8 songs on it, and only 65 copies were made. The price for this album on websites such as Ebay is through the roof. After this attempt at a record, Einstein hung up his bling, and went back to science 100%. This is one man who will go down in the hall of fame of rap, which will hopefully have a dedication to COX. 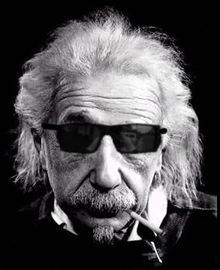 Albert Einstein's formal self as a hobo.

Unbeknownst to casual Einstein-enthusiasts, Einstein had a brief tenure in the world of psycho-analysis. Despite the lack of recognition for his work in this field, his most notable work in this field summated with his phrase, "A good definition of insanity is doing the same thing over again and expecting different results". Since this somehow unshocking conjecture was made in the late 1930s, it has fallen in reputation and now carries very little weight in the psycho-analysis community. A more appropriate definition of insanity is generally regarded to be possessing female reproductive organs and/or a compulsive shopping habit. Insanity is also often characterized by an affinity for 1980s dance pop. What a sad era that was.