Burgertron, also known as the Abominable Burger Collider, is a burger accelerator in Texas. Because it is in Texas, the occasional cow head is also collided with burgers. 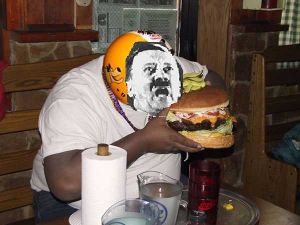 A burger collides with Hitler

The Burgertron was first created in the year 2046 (that's what they want you to think) by McDonalds in an attempt to create new ideas for foods to serve to people. They collided Big Macs with Breakfast Burritos, Kids Meals with Cow Heads, Dip 'n Dots with cheap toys made in China, and more. But they started running out of ideas, and soon decided they would include various random items in their creations.

The Burgertron was decommissioned 2 years later after it created a black hole named Bob by colliding a Kids Meal with Pandoras Box. Fortunately, it had already created 256 awesome sauce combinations of food, enough to last McDonalds over 5 years of Specials!

After Bob was tamed, they decided to re-open the Burgertron, this time for the use of anyone who wants to use it. Its original use of colliding burgers was forgotten, as people were too busy colliding dogs with cats, chickens with old people, scones with Big Ben, and thousands upon thousands of other combinations.