“The only food I enjoy more than...real cheese! That reminds me of the time when...er...what was I talking about again? Oh, yes, cottage cheese. Why is it called cottage cheese? Is it made out of cottages?... It is?!”

“When they cut me open, it was Cottage cheese that was clogging up my colon and causing a bad smell of hobbit cheese. Thank you very much.”

Cottage cheese is an English delicacy created in the early 17th century by a chef who dreamt up the receipe after slipping in vomit on a pavement outside a public house. As its name suggests, it is indeed cheese used to construct cottages and it also serves as a free vomit generator.

Cottage cheese is made up of tiny little chunks of cheese called curds (from the British word meaning "ooh, chucky"). This makes it easy to eat out of a bowl, with a spoon, like the worst,greasiest soup. It also makes this the favorite cheese of anyone with laser feet because it doesn't fall apart in their shoes like other inferior cheese creations. 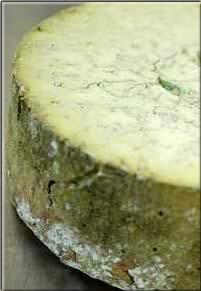 In the late Protazoic period, cavemen found themselves without a place to live, as their houses were being taken over by the slightly homicidal Cave Grues One bright caveman sadly sat down to get some cheese. Then... inspiration struck, killing five others and burning said caveman's hair. His hair was mildly singed, but he had a great idea! The caveman realized he could make a new house out of cheese! He proceeded to run around and tell all of his friends.

And then he died.

However, his friends and family carried on his brilliant idea. They got lots of cheese, then decided to sculpt their house out of it. Before long, they had a beautiful house!

Then the dinosaurs came along and ate their house.

"Maybe this wasn't a good idea..." one cave-person muttered.

"MY CHEESE!," said a nearby caveman, and smacked him upside the head with a billy club.

"FREE CHEESE FOR EVERYPONY!" said a brain dead derpy looking with crossed eyes cavepony who used her wicked kicks and kicked it all away. EVEN THE CHEESE!

Nowadays, cottage cheese is usually not utilized as a building material. However, there are a few cheese fanciers who dedicate every August 27th to constructing houses out of cheese. One cheese fancier, who would not give his name, says, "Cottage cheese is an important relic from our past. Only by understanding the past can we- OH MY GOD A DINOSAUR!" There are also people who study the cheese, insisting that you can smoke it and get real high, man, yeah.

"Cottage Cheese" is also the medical name of a genital condition primarily associated with the practices of unhygenic vagrants who eke out a small living proffering their sexual services to Businessmen in public lavatories. It has been alleged that the downy white fluff which appears around the mouth 2 to 3 days after fellating unwashed homeless males is evidence enough to provide Police with grounds for prosecution.

Many TV chefs badmouth cottage cheese, whining that it tastes bad and can't be used in any recipes (fucking crybabies, all of them!). To overlook cottage cheese is to do without a great source of lean fiber and a versatile food.

High in fiber, low in fat, and great as a substitute for real cheeses or cheeses that actually have flavor, cottage cheese is truly the food of the gods. This rare and highly sought after cheese is available only at gas stations and health food stores, but is well worth the extra time and effort needed to include this dumpy delicacy in your gourmet repetoire.

Also known as farmer's cheese or that cheese that looks like vomit, or that cheese that smells exactly the same fresh as when it goes bad, this type of cheese derived its name from the cottages it's made out of (how they manage to actually milk them, and what they are fed etc., has never been clearly established) (in bed). Originally mistaken for cud, a byproduct of cows discovered by NASA scientists in 1943, it was soon labelled a food product and later adapted for religious ceremonies by a group of German nuns, and has since been served in nunnerys for the past 200 years. (in bed) This cheese tastes great by itself or with fruit added to it right before it is served. (in bed) It is always preferable to get the fruit's permission first.(in bed)

WARNING: Speaking of vomit, one would be wise to first check the expiration date on the carton before opening it (in bed). Spoiled cottage cheese is, in unrefined form, the basis for a gorge-inducing chemical weapon (in bed). See also: Chanel No. 5, Yogurt (in bed).

.. Mix 1 chopped cottage with 4 oz. of lithium starter. . Mix 1/4 tab Rennet into two tablespoons of COOL water. Mix this into the cottage mixture thoroughly using a whisk and stirring for at least 5 minutes. . Cover and set aside to ripen for about 20 hours at room temp (70 F / 21 C).

Combine above ingredients in blender. Serve over hot baked potatoes.

Use cottage cheese in place of noodles, mozarella, and spaghetti sauce in your favourite lasagne recipe to reduce the overall calories and saturated fat. Regular cottage cheese works better than lowfat cheese here.