Forum:Another of those 'bringing in new users' topics 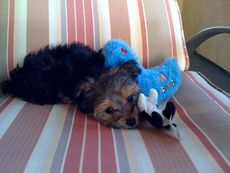 To alleviate the seriousness, here's a nice picture of a puppy courtesy MMF.

Myself and Darkgenome have been in conversation again and agree, like the majority of us, that Illogicopedia needs some sort of kick up the backside or other type of injection to get things rolling along again circa 2008. In a general sense, I think parody wikis aren't going through the best of patches at the moment - Uncyclopedia has perhaps had its moment in the sun and Illogicopedia... well, we all know what's going on here.

So why create a new borderline 'tl;dr' topic about it? Well, 'cos I felt like it, and also to put across some ideas we had, each with varying potential for success. I decided the best place to start would be the front page, ruthlessley tinkering to try and achieve some sort of balance with regards to the community - articles thing (which I'll address soon). Go here to see how it's coming along. I know what you're thinking - it's looking a bit bland at the moment, but bear in mind that I'm still fooling around with the functionalities and tidying up/colouring in (yay!) will come later. Be patient!

The most important aspect here is the presence of the forum topics. Now, I've been wanting to get a 'recent forum topics' section on the front page for ages but never quite figured it out in my head. Some of the more important announcements/funniest threads and such are missed simply because they're two or three clicks away on the forum pages. Oh yeah, I'll also try and figure a way of getting the DYKs in there somewhere.

Header just to break the monotony[edit]

Okay, we reached the conclusion that more frequent features would equal more fervent activity to try and write better and better articles. Now, I know this point has been made before at some point last year. The reason that stalled, I feel, is that... well, I couldn't be arsed updating it every other day. You know, boring real life stuff to do and all that. To try and get some more articles through VFF I've created a reading list, an interim VFF which anybody can post their own articles to without the need for Pee Review. One thing that came up was 'there's nothing to do at Illogicopedia any more'; well, there should always be something to do, even if it's just reading and having fun laughing your ass off at articles. If this works (which it hopefully will), then it'll go some way to solving this problem.

The other thing we discussed was financial incentives. For ages I've been saying if I had the money to spare I would donate some cash to domain name costs (and I'm a couple of years behind on that, Sorry Sepp, heheh) but with SP's say-so, perhaps that could be put to some other use, for example awarding a ten dollar Amazon token to the winner of Illogicopedian of the Month, or maybe some other yet-to-be Christened award/challenge.

Finally, there's the idea of giving the Illogiblog a lick of paint, though I'm happy to put that on the backburner while we get the main wiki sorted again.

Phew. Any thoughts, opinions or chocolate brownies would be very much appreciated at this stage.

Like the two former I'm going to offer a bland aggreeatory opinion. The idea of always having something to do seems the best one by far, and I'll probably make an effort to rotate the feature a lot more than I have now. The forum posts are epic and it'd be great if we could take some of that approach to articles, to make them more community worked spectacles rather than something I read to make recent changes satisfyingly purple. Anyway, that's just ramble, and a waste of valuable feature changing time. If all else fails we can whore out to adverts that reassure us getting ripped is just a mere three weeks away. Cuz getting ripped in three weeks is totally awsum. Wincest out. Testostereich • (ballsack) 10:12, 15 Jeremy 2010 (UTC)

I disagree that that's necessarily a bad thing. The trend away from articles to forum posts has always been something I wouldn't be too sad about. Forums and community stuff is way more fun and awsum than the average article, and people getting in on it is great. It's also likely to mean the fewer articles created will be of higher quality as people don't feel pressured to write all the time. But yeah, uhh, izzle. Testostereich • (ballsack) 18:55, 16 Jeremy 2010 (UTC)

Interesting you should bring that up, FI, because Darkgenome and I theorised that Illogicopedia would do much better as a forum, with the added luxury of maintaining a wiki with creative freedom. Thus, it could be a better idea to market it as such, giving it equal weight, if not more, than article writing. Obviously it isn't just a forum, but people feel more comfortable with forums and will be more likely to visit and contribute. Kind of weird. -- Hindleyak  Converse • ?blog • Click here! 11:43, 17 Jeremy 2010 (UTC)

I think one problem might be that we're pretty obscure. Back when we were on wikia, wikia could link to us and thus people who were randomly wandering wikia could discover us that way. But now we're not part of a larger network like Wikia, because we left wikia and our old site has turned in to wackypedia. So we need some way to draw people here. I have no clue what that method would be though. Perhaps it should involve kidnap. --THE 20:21, 17 Jeremy 2010 (UTC)

Maybe there's a network of websites like that we could join, and sortof benefit from? Testostereich • (ballsack) 20:26, 17 Jeremy 2010 (UTC)

I'm looking and have been looking around for places that I can get to publicise and get more people coming. Just so you know. :)

You do that, dude! I'm... um.. doing absolutely nothing at all to promote Illogic since I decided to stop doing stuff for Retro Yakking, which as we all know was a great big plug for Illogico. I'm not promising anything, but new stuff may be in the offing. -- Hindleyak  Converse • ?blog • Click here! 13:19, 19 Jeremy 2010 (UTC)