So, I'm making a parody of the Harry Potter saga called "Hairy Peter." The first book will be called "Hairy Peter and the Writer's So Stoned," as a parody of Harry Potter and the Sorcerer's Stone. It follows the adventures of Hairy Peter and his friends Ron Measely and Hermaphrodite Danger as they go to Halfwits School of Wizardry and Witlessness. Anyway, would you say that I should post this parody on Illogicopedia or Uncyc? ~

Okay, I'm currently on Chapter Four: The Journey from Platform π! ~

I am impressed by the waste of time involved with this project. Bravo! I will continue to remain completely ignorant of Harry Potter and company in order to more fully and bat-fuckedly savor the resultant content. Could you mention my dog Frunobulax, as a favor? She's a tremendous ?pedia fan, and also knows nothing of Harry Potter. Cheers! Gruntled AKA Reverend Zim_ulator AKA Grunteloons - Exchange ideas 02:53, 19 Ergust 2011 (UTC)

Here's the poster, an edited version of the original which shows how little time I have on my hands. ~ 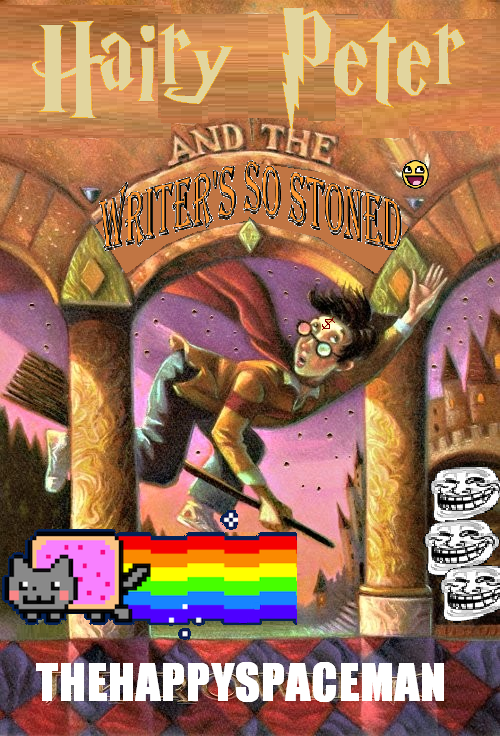 @Hindleyak I like NYAN CAT too, but nudity? Eh, might make the book R-rated. Still, what do you suggest? ~

@Another_n00b Because most of the new memes aren't that funny. (Okay, I admit Double Rainbow and the Bed Intruder Song are hilarious, but I seriously hate My Little Pony: Friendship is Magic. Which explains why so many people troll me on deviantART. Hell, I even got a Ponytard mocking me with his own account.) ~

Ok, I can find that as a legit reason. But why does it seem the Nyan Cat and trollfaces are very OoP? Nyan Cat should be flipped over, so it at least looks like there's an end to his body. And the trollfaces could go around the top or bottom. Also, DeviantArt is for 12 year-old girls with confidence issues and a list of strange fetishes longer than their psychiatrist bills - Another n00b 10:04, 27 Ergust 2011 (UTC)

Whatever about that last part-- you have to be 13 and up to be a member. PWNAGE!!! Also, I did the NYAN CAT to cover up the unicorn that was originally there, and the trollfaces to cover the heads of the three-headed dog. ~

Yes, but kids do sign up and pretend to be older than they are. It would be ridiculous to state that never happens, especially with something as popular as DeviantArt. - Another n00b 11:57, 28 Ergust 2011 (UTC)

I've made parody names for all the characters... well, most of them, anyway.

But I need to come up with a parody name for Lord Voldemort and Nearly-Headless Nick. Also, I'm at a dilema on whether to make the parody name of Professor Quirrel be Professor Qwerty or Professor Squirrel. Could y'all help me with these things? ~

@Gruntled Frunobulax will be in the comic, as one of Haggis's pets which lives in his beard. ~

Still, does anybody have any parody names for Lord Voldemort or Nearly-Headless Nick? ~

I was always partial to Lord Headcrab, but since that was just a guy with one of them crab things on his head, I really couldn't say. ~

I came up with one: Almost-Headless Dick! And Lord Volkswagen! ~

Chapter One is out! ~