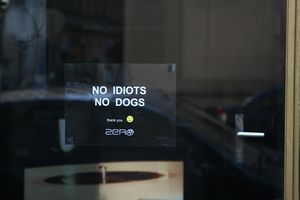 Almost the equivalent of saying, "No high school girls". 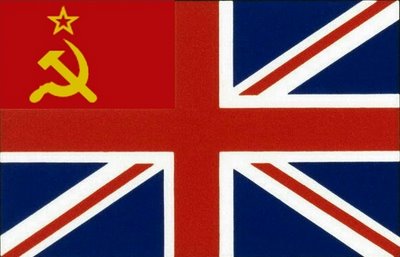 “These miscreants are part of a global communist conspiracy designed to put Fidel Castro in charge of America and to recognize George Soros as a patron saint. They are destroying the American moral fabric piece by piece and turning it into dog shit. They are creating a huge burden on the American welfare system by uncontrollably creating descendants to eat and defecate their way to more food stamps, Medicaid, and moolah. Then they have more descendants to get more government money and then Obama has to step in and make Planned Parenthood provide free birth control. Then, after that, their kids grow up and repeat the same process. What would Jefferson think about this perversion of the United States of America? Call my red telephone and explain this to me!!!! Washington? Anyone?”

For those who like Satire, the so-called funny people at Uncyclopedia have an article about High school girls. 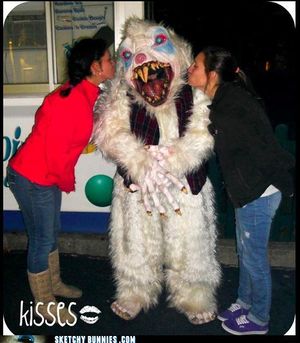 High school girls will do almost anything.

“These pinheads in the lamestream media suck money from these dopes like stealing candy from a baby. And I don't do that with old people by marketing my books to them!”

“They are so much less smart than boys, so I give them 20% less questions on exams than boys. See if you can learn how to sepll out superiur.”

~ The unfortunate brother of a high school girl

“Stupidity can be found in those who spend hours talking to rectangles.”

The high school girl is a slug-like[1] creature which lives parasitically from the rest of the human race. They are tolerated by high school boys primarily due to the proliferation of hormones, parents who don't know better than to have them put down, the education industrial complex and perverts, and generally exterminated on sight by Sandwich Demons.

One can spot the high school girl in nearly every surrounding by its obnoxious snorting, abuse of the word "like", intoxicating fragrances, general stupidity, delusions of grandeur, notorious usage of argumentum ad hominem, blatant admiration of slaves such as Justin Bieber tailored by the lamestream media, eating habits (or lack thereof), its consumption of mass media to emulate one another, bizarre mating habits, and the quid pro quo mentality in gaining favor of teachers. 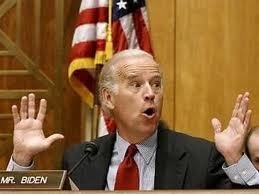 When polled, 99.99% of high school girls identified this man as their grandfather

During the Civil War, most industrial ingredients went to blow the heads off some Confederates. Therefore, the abominable practice pictured here would not be feasible until President Franklin Delano Roosevelt created a Nail Polish Bureau under the New Deal.

The high school girl originated when the modern American public school education system expanded in the 1800s. During this time period, the high school girl had not yet experienced devolution and could actually think a coherent thought not involving nail polish or wiener schnitzel. These thoughts ranged from home economics to basic arithmetic. One would consider this too much of a feat for the modern high school girl, since the concept of adding numbers would likely result in a moderate to severe brainfart.

After the Civil War, the Women's Progressive Era came about. Susan B. Anthony fought for equal rights. In short: they won. To wit, the education system was to provide "equal opportunities". One must not forget that the historical role for this species was to eventually become a house servant cleaning up after a brute who was out of the house half of the day "working" (though not always at a job where he was actually paid).

President Franklin Delano Roosevelt provided the basis for the idiocy of the modern high school girl. He created several agencies in his alphabet soup euphemistically called the New Deal which include the Nail Polish Bureau, Association of Exotic Perfumes, Ignorance in Current Events to Produce More Democrats, Mass Media for Young Women, MSNBC, and The Pill Agency. These groups provided for the aforementioned devolution. Gone were the days of menial slave work: welcome to the days of obnoxious snorting and idiocy. One of its finest products: Sarah Palin.

Enter Phyllis Schlafly. She knew that the woman was being turned into this sort of ignoramus by the wiles of the progressive Democrats. Never would the youngsters in American society turn into idiots. Why would progressives want young women go from spreading knowledge in the art of home economics to spreading her legs to some football junkie she barely knows? Schlafly championed for this glorious past that never actually existed. Rallies, marches for life, everything. The whole enchilada. Schlafly was largely ignored and plunged into obscurity, but one of her sons did go on to create the most entertaining wingnut blog.

It was clear: the role model for young women went from Madame Clare the House Servant to Monica Lewinsky. This happened in a scant 100 years. Now we have the sad situation we currently have. It is worth noting that after Albert Q. Gore invented the Internet, they became even more immoral.

The average high school girl has some characteristics that distinguishes it from the rest of the human race. Among these characteristics is an intense desire to procreate. One may blame this on empowerment organizations such as Media Matters. Quoth Rush Limbaugh:

“They're all sluts. Prostitutes. They pay to have sex. And when they can't afford birth control, they make the government pay for it. We should make them post their lewd actions online”

They also like to organize in groups called cliques. This will be discussed later.

These creatures have shown a profound ignorance in the fields of basic algebra, basic US civics and history, crapometry, basic standard English,[2] basic economic theory, (as in if there is no gas, there will be no food delivered to McDonald's) and even intelligent conversation without using the word "like" obnoxiously or without talking about Jersey Shore.