For those who can't handle the real truth, the spinners of fake truth at Wikipedia have a thoroughly boring article on Rush Limbaugh. 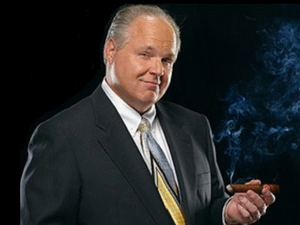 Ladies, try to control your orgasms.

A defensive play in the sport of Making up Oscar Wilde quotes, Rush Limbaugh was a particularly aggressive player, who would often run away with a match, unless stopped early on by an oxymoron.

Various counter-attacks were employed against Limbaugh, most discredited, some, like the Ruy Lopez found to be more suited to Chess than to Making up Oscar Wilde quotes. Eventually the standard defense of Rush Limbaugh was discovered by none other than Winston Churchill.

In this defense other players charged repeatedly at Limbaugh, while shouting out Oscar Wilde quotes that also posed tricky philosophical or scientific questions. Limbaugh was often unable to reply to these with an appropriate made up Oscar Wilde quote, often coming out with a made up Bill Clinton quote instead.

Rush is also an excellent dancer.

The archetypal Rush Limbaugh was that first employed in the 1066 world championship by an anonymous player called Fred Astaire,

“Is it possible I can make Christina Aguilera dirtier using only three small goats and a tube of toothpaste?”

Limbaugh was about to reply, when George Bush charged at him, and he hesistated, only to come out with:

As this was obviously a made up Pope quote, Limbaugh was subject to the second penalty decree, and in the end, forfeited his match.